We only had one day to spend in Florence. We planned to arrive early with an agenda in hand based closely on Rick Steve’s “Florence in One Day” recommendations. We were prepared with pre-ordered museum tickets from the internet, and were wearing quality gym shoes.

I was disappointed with my first impression of Florence, as we navigated to a parking lot outside of the city centre. Sidewalks ran along apartment buildings butting one against the next, with an occasional small shop tucked in along the way. It looked like most other urban cities. We had to walk a distance until we found a Taxi in front of the Pitti Palace that dropped us off at the door of the Bargello—ahh, now we’re in Florence.

9:00 a.m.—The Bargello museum contains statue after statue, a collection unlike anything I’d witnessed before. Donatello’s David (the influential first male nude to be sculpted in a thousand years) and  Michelangelo’s first major work, Bacchus are two of the most notable. The Bargello also displays the bronze panel competition entries designed by Ghiberti and Brunelleschi for the Baptistry doors. The designs are considered the first products of the Renaissance by some because of their deviation from Gothic art. No photos allowed inside the museum.

We spent nearly an hour in the Bargello and then walked a short distance back towards the Arno to the Uffizi Gallery—10:00 a.m. The Uffizi is filled with the greatest collection of Florentine painting anywhere—Botticelli’s Allegory of Spring, Adoration of the Magi, and The Birth of Venus; Leonardo da Vinci’s Annunciation and Adoration of the Magi, Michelangelo’s Holy Family, Raphael’s Madonna of the Goldfinch, Titian’s Venus of Urbino, and Parmigianino’s Madonna with the Long Neck, to mention a few. It was surreal— being in the presence of these masterpieces. At first we were buoyant with elation until we started to experience sensory overload and became somewhat numb to the feast before our eyes. I felt like I had felt a few years before in the Louvre, “Oh, that’s just another Botticelli, we have to keep moving so we don’t miss Michelangelo’s David.”  I don’t know how much time you would need to spend to saturate yourself—more than the less than two hours that we spent. I became jealous of the Florentines who could view this incredible wealth of artwork at their beck and call. 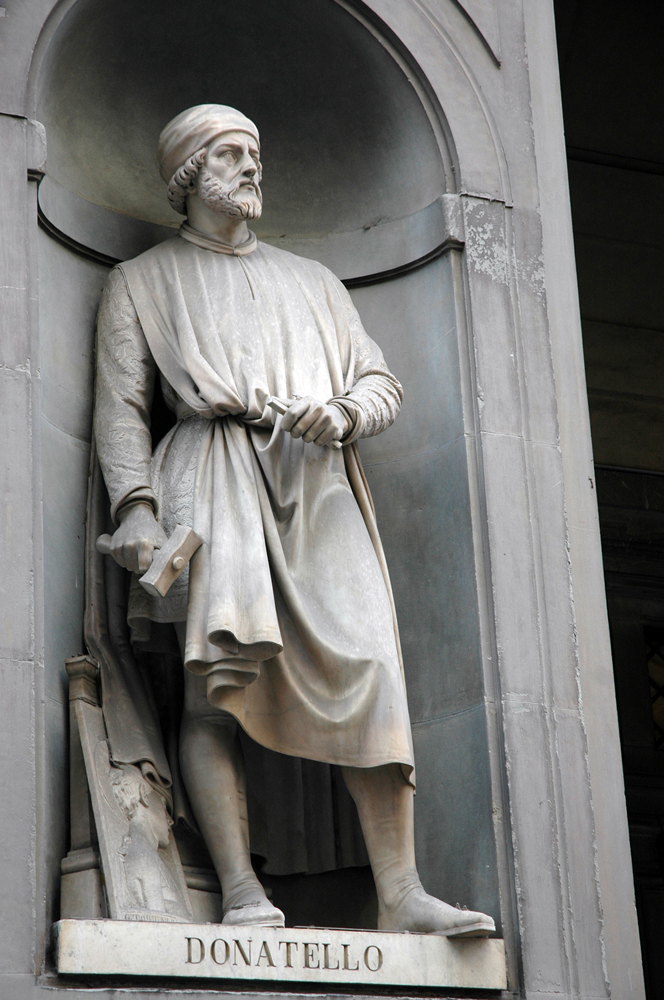 We left the Ufizzi through the courtyard that holds 19th century statues of the great figures of the Renaissance—11:30p.m.

Around the corner from the Uffizi, the Loggia on the Piazza della Signoria is filled with statues—just standing on their pedestals out in the open—Cellini’s Perseus and Giambologna’s Rape of the Sabine Women. Unreal.

Already exhausted, we stopped for lunch at a trattoria on the Piazza della Signoria. We still had two museums and a Duomo to go.

We walked about six short blocks to the Duomo and the Baptistry. The people in the Middle Ages were quite practical—frequently the baptistry faced the church and the hospital faced the cemetery. (Steves) The bronze doors on the Baptistry were created by Ghiberti who won the competition.

But the cathedral is famous for the first Renaissance dome, designed by Brunelleschi, who lost the competition for the Baptistry doors. Just going to show that sometimes you win when you lose. The dome is visible from all over the city. When the church, which is Gothic, was built in the Middle Ages, the architects left it unfinished with a hole in the roof waiting for a dome (and the technology to build it). In the 1400s Brunelleschi finished the job. The church’s facade is from the 1880s.

Unlike Siena’s duomo’s extravagant and rich interior, the interior of Florence’s duomo was a bit stark, but graceful. It was largely an empty open space with tall columns stretching upwards. It actually was something of a relief and provided a bit of rest for my weary eyes.

The Duomo is somewhere between the Uffizi at the Arno River and the Accademia where we had 2:00 tickets to see Michelangelo’s David. We walked on.

Down the hall inside the Accademia, David stands alone on his pedestal under a dome. He is a giant, much larger than I imagined, and he is magnificent. From a block of cold stone Michelangelo carved a man who appears to be made of flesh and blood. As you approach the statue he grows in magnitude. A line of tourists slowly circles the protected ring where he stands. Benches provide a place to sit and absorb or contemplate. It is almost a religious experience. Like la Pieta, I have to force myself to turn my back and walk away.

Now we have to walk all the way back from where we came, through the town and across the Ponte Vecchio crowed with vendors and shoppers, to the Pitti Palace.

I suspect we followed Rick Steve’s guidelines and saw the painting collection in the Palatine Gallery along with some of the rooms of the Royal Apartments. But I don’t remember what I saw in the Pitti Palace as my mind was completely fogged over. Although I do remember thinking later that I wished we had chosen to view the gardens outside rather than the artwork. This is definitely something we would have appreciated more had we planned a Florence in two days tour inside of only one.

It’s 6:00 p.m. We can’t hardly walk another step. We are starving. We pulled out our tour book and saw that Rick Steves recommended a small bar right across the street from the Pitti Palace for a bite to eat. We took his advice and were grateful for it.

See more links to posts about Italy on my “Places I’ve Been” page.

7 thoughts on “Florence in a day”