This is not your typical I-went-to-the-garden-store-and-bought-a-flat-of-petunias type of gardening. This is your I’ve-had-it-with-the-invasive-ivy-and-it-must-go type of gardening. Under all these leaves and vines, it’s dark and it’s dirty.

Here’s the thing. You can see the ivy or ground cover,  I haven’t identified it yet, covering the Angel garden at the corner of the drive. (Pretend you don’t see the irises in the far left corner; I’m going to talk about them tomorrow.) I actually think the ground cover looks kind of lush and wild here. Lush is good. And I can appreciate a good wild.

Last year, our first spring here, we just sat back and watched what was going on in this garden. We were disappointed to find out that once the irises were spent, with the exception of a few daylilies, not much was going on. What we had was a sea of this ground cover. Which is fine, if that’s what you’re going for. But with such a great sun exposure, I was hoping for a little more color and excitement. 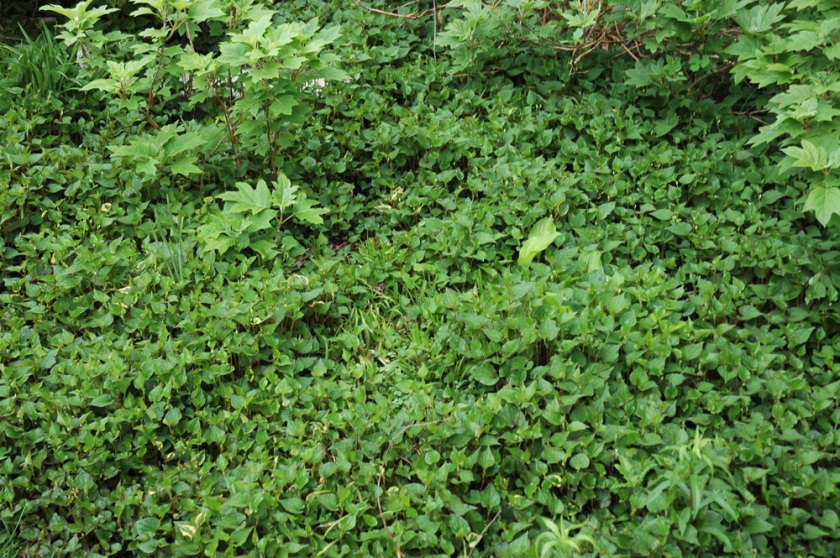 The other problem is, if you look more closely, this ivy is crowding out or covering up all the other plants that someone had lovingly planted years ago. You can just make out a leaf of a hosta reaching up above the ivy shouting, “Hello, I’m in here.” 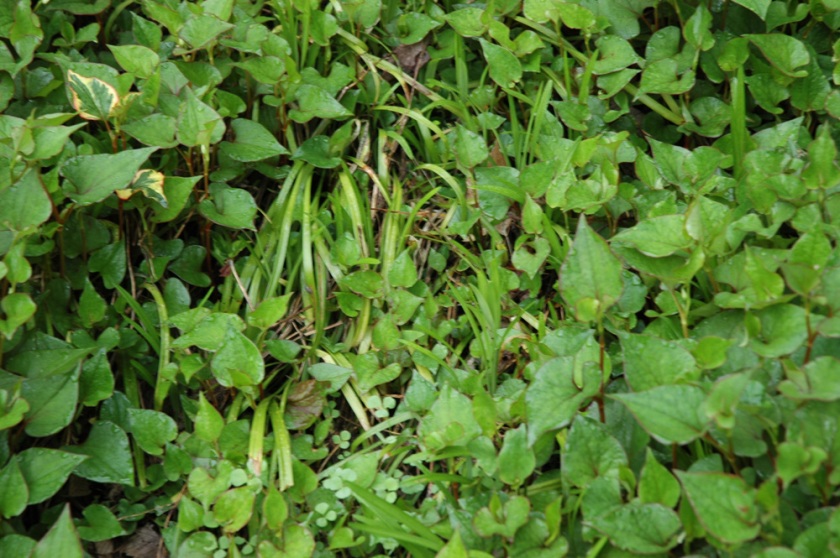 Then there are the grasses. They are completely infiltrated and covered over by the ivy here. Personally I think this looks ridiculous. Wild I like; manicured can be good; but I don’t tolerate ridiculous. Something’s got to go. If you want ivy, then get rid of the grasses. If you want variety, lose the ivy.

Down a few steps from the valiantly struggling grasses, these daylillies are rising above the ground cover. They don’t look qute as ridiculous as the grasses since there is a little contrast in the size, but if you look closely, you can see the sneaky ground cover has worked its way into the plants and is poking up in the middle of them. Not good in my book.

The other thing is; this ivy stinks. Literally. It has a pungent smell.

A few weeks ago when we were planting some perennials we thought we might be able to just clear enough space to plant and then allow the ivy to flow around the other perennials. At first this seemed like a good plan, but then we realized that we were setting ourselves up for a prolonged battle that we weren’t certain to win. 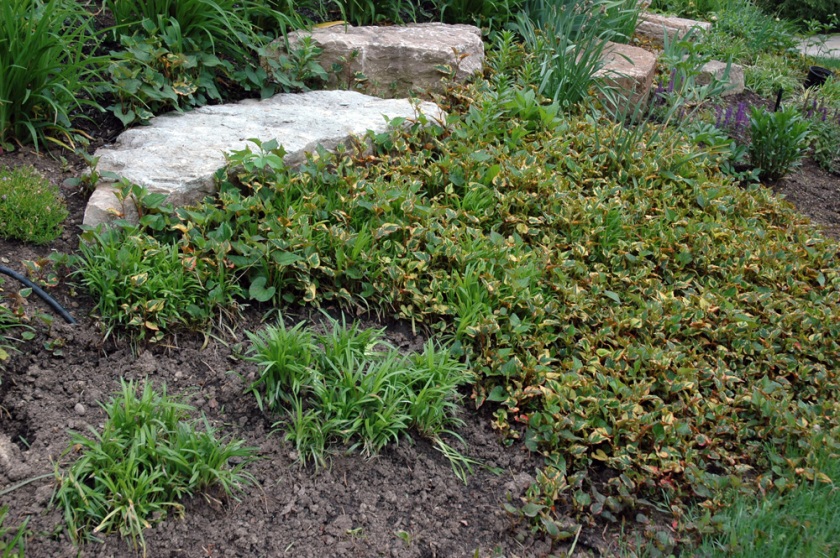 In this Angel garden we have three sections of this grass, if you count the first one I showed you which is largely hidden from the naked eye. I started working on this patch of grass earlier this week. You can see on the left where I’ve cleared out the ground cover, and on the right where the ground cover has successfully invaded the remaining grasses. 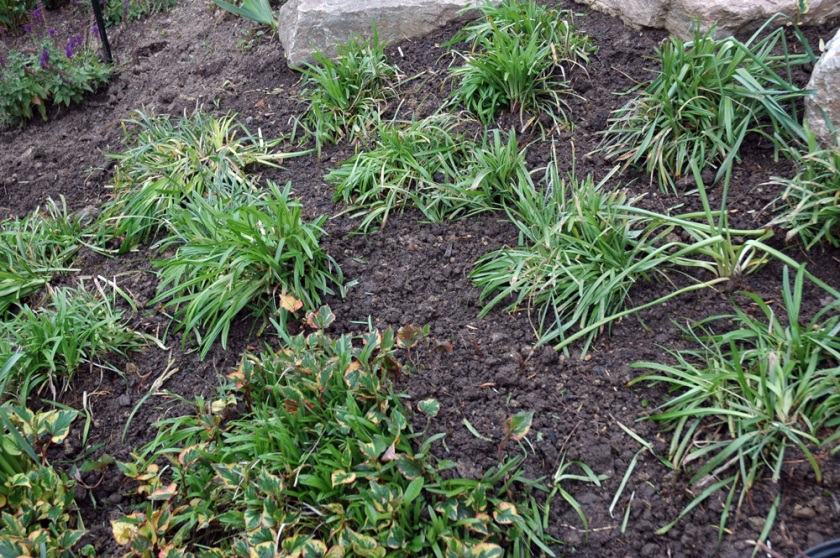 Here is a view of the third section of grass that is most of the way finished. There is still one clump at the bottom with the ivy in it.

I love perennials. I love that you can dig them up, divide them into multiple smaller plants, replant them somewhere else, throw a bucket of water on them and they will happily do their thing.

Here is my battle station. Gardening was much easier work when I didn’t have the fifty-four-year-old aching back and arthritic knees of midlife.

I basically dig up a clump of intertwined grass and ivy and then sit on my little bench with this ball of dried leaves, crumbling dirt, inter-tangled roots and hard-packed soil in all its glory plopped right on my lap.

This is what the bottom looks like. The white lines are the runners from ivy. I pull as many of these out as I can, loosening the dirt as I go. Then I flip the clump over and comb through the grass with my fingers looking for ivy to pull out. I do this back and forth until I have confidence that most, if not all, of the ivy is gone.

You can also see a little worm in this clump at the bottom of the photo. I like these little guys that stretch their head up out of the soil and sway side to side as if to say, “Hey, what’s going on out here?” When I see them, I gently tug them out of the soil and return them to the garden. Worms are good for the garden and they were here first.

When I see the occasional spider, however, my reaction is somewhat different. Especially if I see it in the clump of dirt that is lying on my lap. Who knew spiders lived underground? 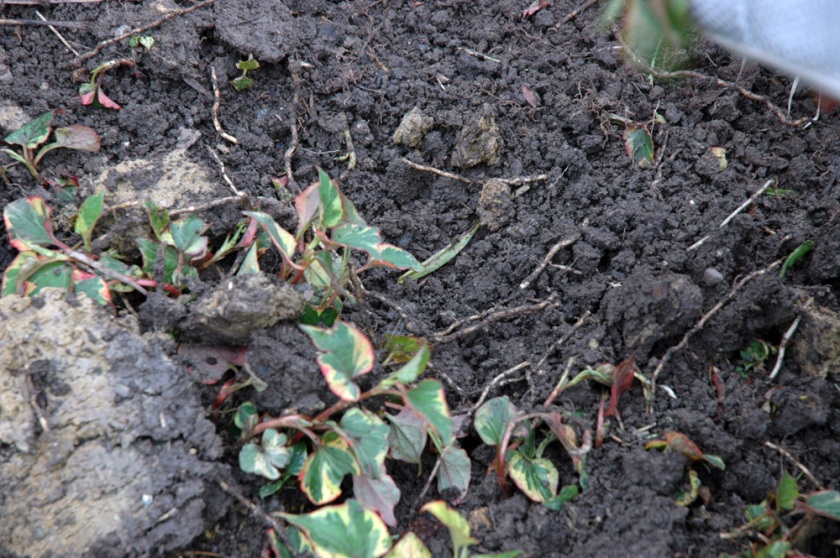 I wanted to show you how after we’ve cleaned out the clump, we still need to go back into the soil and dig out the runners that remained behind. These runners have plowed their way through the clay at the bottom. We will probably never see the end of this ground cover. Mark wants to pull the remaining plants out and spray Round-Up on the whole mess of ivy, but there’s something about that that I just don’t like.

Fortunately for me, Mark is a dervish in the garden. Give him a shovel and watch him go. Although I have worked here a couple days largely by myself while Mark was off doing his Honeysuckle thing, he takes pity on me from time to time and comes out to help me move this project forward. You can see here how much further we have to go.

I go out early in the morning before it gets too hot because it is a dirty job and may be more than I can handle in the heat with sweat running down my face and into my eyes. As it is, in short order I have soil ground into my pants, flicked into my hair, speckled across my glasses and caked under my fingernails, even though I am wearing rubber-coated gardening gloves, all the while clogging around with three inches of mud caked to the soles of my boots.

It’s the dark side of gardening. It’s a bad job, but someone’s got to do it.

See more posts about gardening in my series.