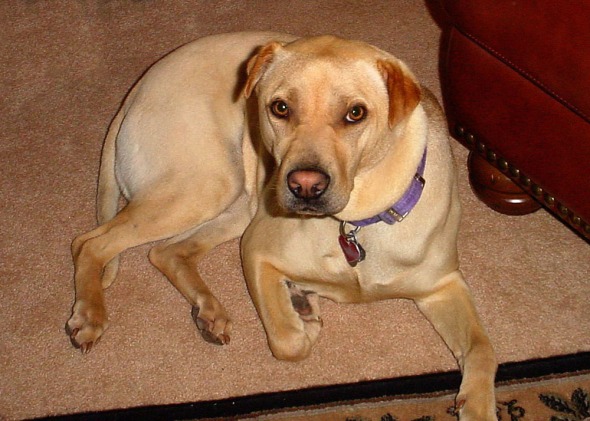 Honey was our first family dog and only dog besides Arthur, if you can fully consider Arthur a dog. Honey was beautiful. People complimented her everywhere we took her.

In the spring of 2001 we finally broke down and decided to get a dog when the kids were getting older, I was busy running them around, and our youngest son was going to be left home alone more and more. We thought a dog would add a sense of security and companionship to our home.

When I called a local vet about dog breeds, the receptionist said, “You might want to come in and look at a rescue puppy we have here.”  So we went. Anna had always been intimidated by dogs since she had an unfortunate incident when she was young. But we thought a puppy wouldn’t be threatening. When we got to the vet’s and they took us to the outdoor run to show us Honey, Anna took a step back. And I was surprised myself. I was expecting a puppy. Honey, the name the staff had given her, looked like a full-grown dog to me. And she really was full-grown in size by then, but the vet estimated she was only about nine months old. One of their clients had found her lurking around the back of their yard by their shed. Later we found a couple of beebees imbedded in her back legs.

We were told Honey was given the name not only because of her color, but because of her disposition. With that kind of recommendation from experts, we knew we would be getting a sweet dog. We were right.

When she died eight years later, in the spring of 2009, from a spinal disc problem we were trying to treat, we were all devastated.

I regret she wasn’t able to be here with us in our new home where she would have had a large yard to roam, deer to watch, and plenty of squirrels to chase.