Three weeks after surgery, Mark is walking around the house without a cane. He has started doing minor household chores like clearing his place after a meal and emptying or loading the dishwasher. Yesterday he refilled the birdfeeders.

Although he walks well, he still walks slowly, and doesn’t like to be on his legs for very long periods at a time. Since the surgery we have gone out to lunch, dinner and breakfast. Last week he went to Macy’s at a mall with me. I parked at the Macy’s entrance so he wouldn’t have to walk a great distance. While the sales clerk was assisting me, Mark sat in a chair in the shoe department (which isn’t really all that different from what he might have done before the surgery).

Mark went for his two-week post-op check with his doctor last Wednesday where he was told he only needs the cane when he goes out in public. I don’t believe I’ve seen the cane in his hand, here or when we’ve gone out, since. He has been set free from the CPM machine and no longer needs to wear the tight hose, unless his legs begin to swell.

Mark wants to drive to his physical therapy today. His therapist has told him he probably could drive as long as he can move his foot back and forth without pain.  I plan to go with him. I’m not comfortable with him driving on expressways yet, but I think he will do fine going the short distance along primarily residential streets to physical therapy. He is pretty worn out after therapy and I suspect he will not want to drive home.

The doctor recommended he continue to take the Lyrica and Celebrex, neither of which are narcotics, until his supply runs out. The Percocet remains up to his discretion for as long as he needs it. He has not taken any for two or three days. Prior to that, he was only taking one in the middle of the night when he couldn’t sleep because of discomfort in his legs.

With the removal of the outside bandage, Mark is now allowed to take showers. This hasn’t been as big of a deal as he anticipated because he felt the sponge bathing he was able to do worked out pretty well. I shampooed his hair periodically.

The removal of the staples was a non-issue because there were no staples.  Mark’s incision had been closed with a single internal stitch that will dissolve, and steri-strips on the outside that will curl up and drop off. Overall we both think his scar looks good, much better than I, for one, had anticipated. 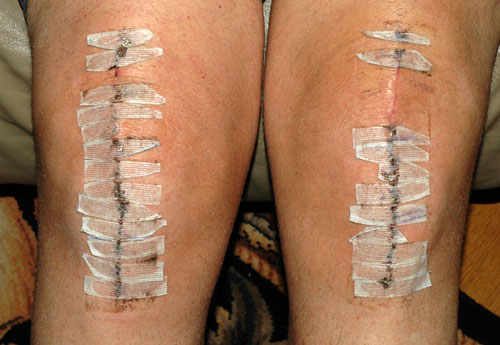 If you look closely at the above picture, you can see that the knee cap also looks like it was resurfaced.

Mark is experiencing a little numbness on the outside of his knees. It is noticeable, but not particularly problematic. He knew this was a possible side-effect of the surgery.

Mark continues to do the physical therapy exercises here at home: front leg lifts, side leg lifts, and bending knee lifts (not the proper name for this exercise). He does them three times a day, 50 repetitions on each leg. He’s started adding leg weights to his ankles.

We are grateful that Mark’s recovery has gone so quickly. Last week the woman beside him at therapy was four weeks post-op from a single knee replacement and was still using a walker. I don’t think Mark’s recovery made her feel better. We can’t really explain it except to say that Mark had an excellent surgeon, he’s relatively young, strong, and healthy; and he prepared himself by doing the recommended exercises prior to surgery; and faithfully continues to do them now. And he is extremely hard-headed determined.

And maybe an angel or two in heaven are looking out for us.

You can find links to the entire series on Bilateral knee replacement surgery here.