You’d think I’d know everything there is to know about the city I’ve lived in, as an adult, for more than 33 years. Thursday Mark and I went on the  Iconic Cincinnati Tour by American Legacy Tours and I learned a few things.  Maybe you will too.

The Genius of Water statue on Fountain Square.

Donated to the city of Cincinnati by Henry Probasco in memory of his brother-in-law and business partner, Tyler Davidson, The Genius of Water fountain, located downtown on Fountain Square, celebrates water and all its uses. It is composed of four levels, although the third level is not clearly visible in this shot.

At the very top The Genius of Water showers water down from the 438 holes in her hands.

Four sculptures on the tier below the genius depict the practical uses of water.  Facing this direction, a firefighter stands on a roof where a flame shoots up. To the right a woman gives an elderly man a drink of water. On the left, another woman bathes her child.  And, not visible here, a farmer appears on the far side of the fountain.

The third tier,  in the shade below the four practical uses, shows four children demonstrating the recreational uses of water. One has an ice skate, another a necklace made of shells, a third holds a crab, and the fourth is fishing. Between the children rectangular panels depict industrialization, fishing, farming, and navigation.

On the ring around the pool at the very bottom, four children ride animals which produce water safe for drinking. I don’t know how many people realize this. I’ve never witnessed anyone partaking.

Originally the fountain was located on an esplanade built that for purpose in the middle of 5th street. You can read more about it and see a photographic history of the fountain at codex99. Later the square was built and the fountain moved. It has since been renovated and moved a couple of times.

Fountain Square is located on the site of a large Indian ceremonial mound. As such, it became a popular place for the early settlers to gather and eventually it became the center of the city. This location was far enough away from the river to protect it from flooding. Today Fountain Square is surrounded by shops and restaurants and is a lively place where people gather for all kinds of celebrations and events. 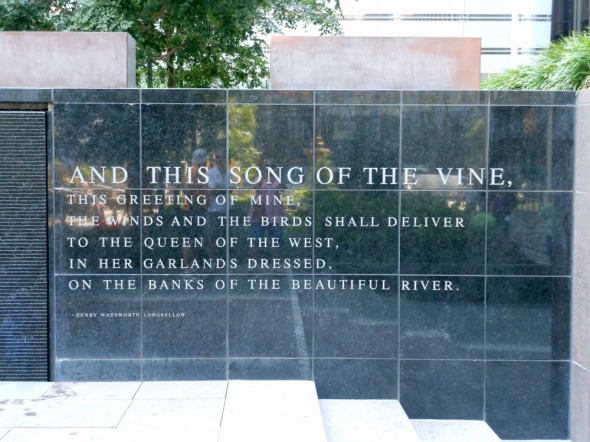 Before leaving the square our tour guide Tim Shafer pointed out the inscription from a poem by Henry Wadsworth Longfellow. This may be where Cincinnati derived the nickname of Queen City.

Longfellow was friends with a Cincinnati wine-maker named Nicholas Longworth who grew grapes on the hills of Eden Park and beyond. In the mid-1800s at Cincinnati was the largest wine producing region in the United States. That came to an end during the Civil War when vineyard workers went off to fight. The vines died and were never replanted.

Longfellow apparently loved the Catawba wine produced by Longworth and wrote this poem to that effect, forever creating an image of Cincinnati as the queen city.

The Gwynne Building and Procter and Gamble. 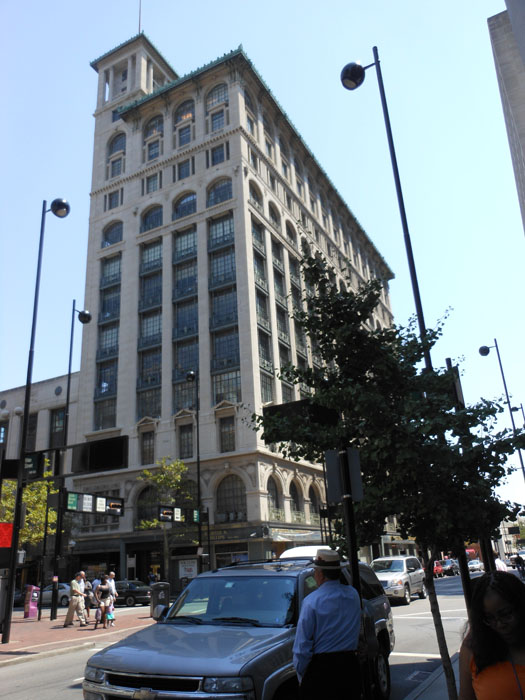 Located on the corner of 6th and Main, just a short walk from Fountain Square, the Gwynne Building occupies the location that once contained Procter and Gamble’s first factory. After the factory was moved out of the city, The Gwynne Building, financed by Alice Gwynne Vanderbilt, was built here in 1914. Alice Gwynne Vanderbilt also played a role in the building of the Vanderbilt’s summer “cottage” at Newport Rhode Island—The Breakers (We visited The Breakers a couple of years ago and I thought I posted photos, but now can’t find them on my blog. So perhaps not.)

The Gwynne building served as Procter and Gamble’s corporate offices from 1914 to the mid-1950s. Initially P&G leased the building and then later bought it. 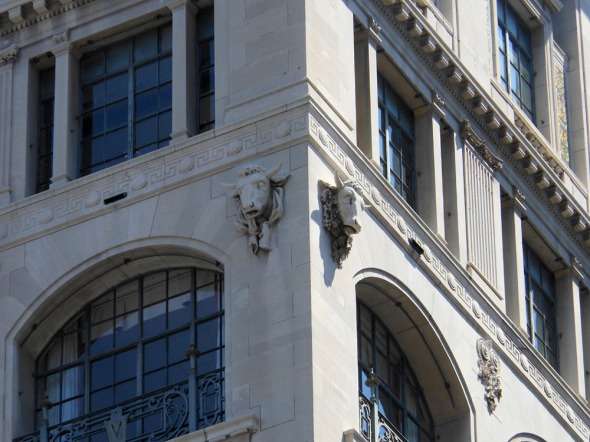 The Gwynne building’s architecture style is Beaux-Arts. Our tour guide has not been able to find out why the oxen heads are up on the corners near the top of the building. 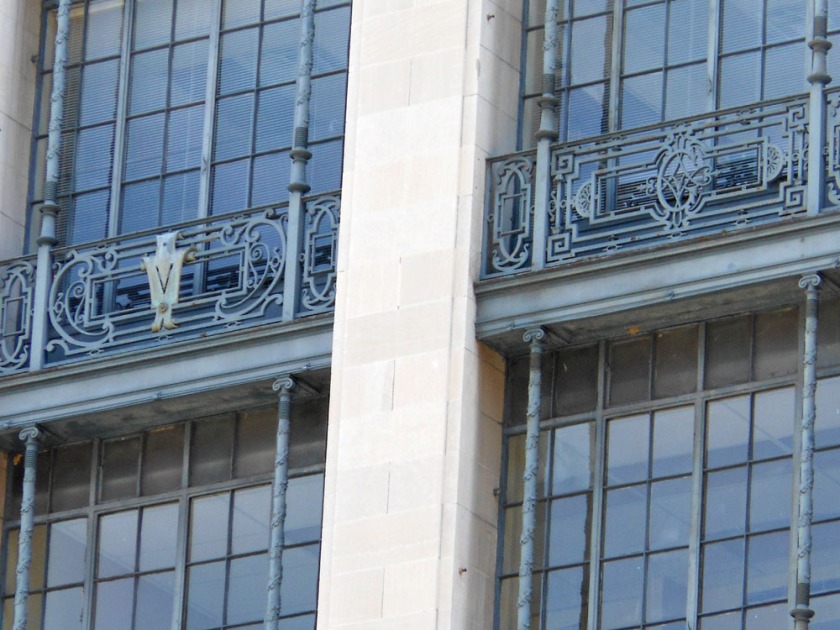 The decorative grillwork on every window contains either the letter V or G for Vanderbilt and Gwynne. You can read a brief history of the Gwynne building at TheGwynneBuilding.com. 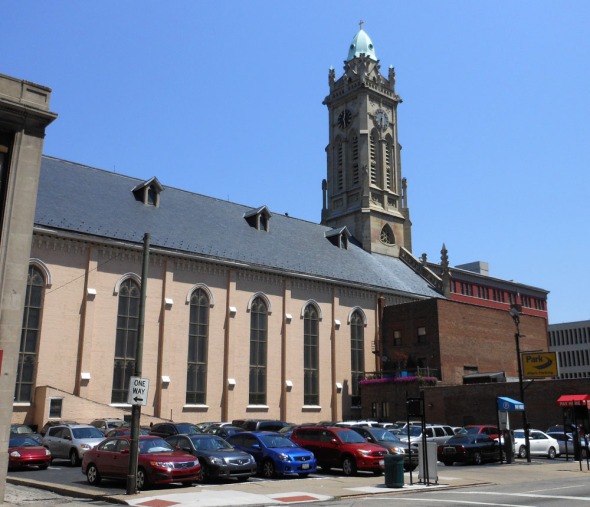 We walked on to our destination, St. Xavier Church. This side view was the best shot I could get of the whole church while on the tour.

Otherwise I ended up with shots like this of the front of the church, which I think are interesting but don’t give an accurate picture of the church building as a whole. St. Xavier Church sits on the site of the first Catholic church inside the city limits. In 1921 an old wooden frame church at the corner of Liberty and Vine was put on rollers and moved several blocks to this location. The move didn’t go well and the church had to be rebuilt here. The church that exists here today was built around 1860.

When the Archdiocese built the cathedral on the west side of town, St. Xavier became the Irish church for this area. St. Louis, a few blocks away, was the German church. Apparently, in the mid-1800s the spirit of Christianity was not large enough to embrace the two cultures within four walls. Today St. Xavier is a Jesuit parish.

We passed the headquarters of Procter and Gamble with its twin towers and wisteria covered arbor surrounding the front park. We could hear beautiful voices singing in harmony. Choirs from the World Choir Games were singing here during the lunch hours. Lovely.

The Masonic Center is directly across the street from the P&G Headquarters. Although normally the iconic tour goes inside the center, we were not able to  because some of the World Choir Games events were being held in the 800 seat theater on the left side of the building. The Taft Theatre is beside the Masonic Center on the right side. 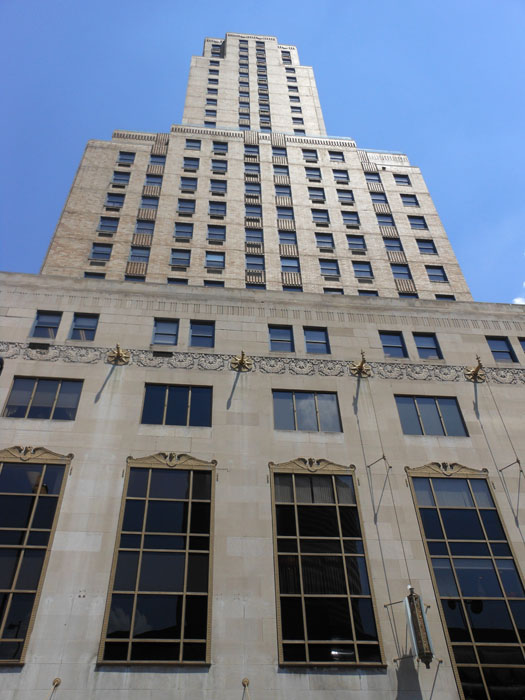 Until recently with the addition of the tiara on top of the Great American Building, the Carew Tower was the tallest building in Cincinnati. It is Art Deco in style.  Our tour guide explained that Art Deco buildings often are built in successive smaller layers like a wedding cake.

The tower was begun in 1929 by John Emery who wanted to create a city within a city. The building was designed to contain hotels, restaurants, offices and retail. When he couldn’t get any financial backers for his idea, he sold all his stock (early in 1929, fortuitously right before the crash) and financed the building himself. The Carew Tower was built in two years with people working around the clock. Its construction provided many much needed jobs during the depression.

The panels around the entrance contain bronze medallions with all the modes of transportation that brought people to the city of Cincinnati. I can see a covered wagon, a steam boat, and a train on the bottom three shown here. 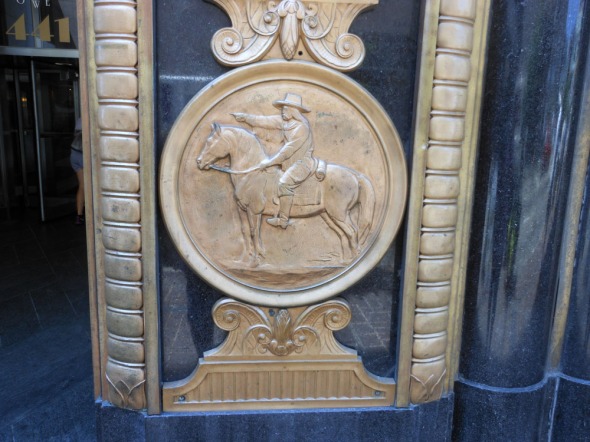 And let’s not forget the reliable four-legged friend.

We entered the Carew Tower on the second floor, from one of the last remaining sections of the Skywalk that used to bridge congested roads for pedestrians. From here we have a view of the Arcade that used to be a bustling place but now is a more sedate shopping area. The mosaic at the far doorway (and on the one beneath us not visible here) is done in Rookwood tiles.

We took the elevator to the top of the Carew Tower for a fabulous panoramic view of the City of Cincinnati, that I’ll show you in my next post.

A big thank you to our excellent tour guide, Tim Shafer, who provided entertaining and informative stories about the people who were instrumental in building the city that we love.