What causes geysers, hot springs, fumaroles, and mudpots?  In part, a partially molten magma chamber below the earth’s surface, remnant of a cataclysmic volcanic eruption that occurred hundreds of thousands of years ago.

Each year two to three million people visit just such a place and walk along boardwalks across steaming pools and bubbling holes at Yellowstone National Park, where a volcano experienced huge eruptions 2 million, then 1.3 million, and most recently 640,000 years ago. “The magmatic heat powering those eruptions still powers the park’s hydrothermal features.”  (National Park Service brochure – Yellowstone).

I don’t know about you, but the idea of volcanoes frightens the bajeebies out of me. One word. Pompeii.

And had I fully realized that I would be walking around the top of a volcano, I likely wouldn’t have been nearly as enthusiastic about visiting Yellowstone where, lacking any grasp of either geology or geography (just ask my husband who will be happy to tell you), I expected to merely see Old Faithful, never really thinking about why.

So yes, I was surprised when I was walking along boardwalks and the truth set in.

Yellowstone has the distinction of being the first national park in the world. William Henry Jackson’s photographs and Thomas Moran’s sketches influenced Congress to establish Yellowstone  in 1872. Yellowstone contains over 10,000 hydrothermal features, approximately one-half of the world’s. There are over 300 geysers in the park. ( National Park Service- Yellowstone )

Yellowstone occupies the northwest corner of the state of Wyoming where it has entrances from the north, northeast, east, south, and west. We were in southern Montana in June of 2010 for a wedding and decided to spend a day at Yellowstone. We entered through the north entrance and exited through the west entrance.  (See a map.) 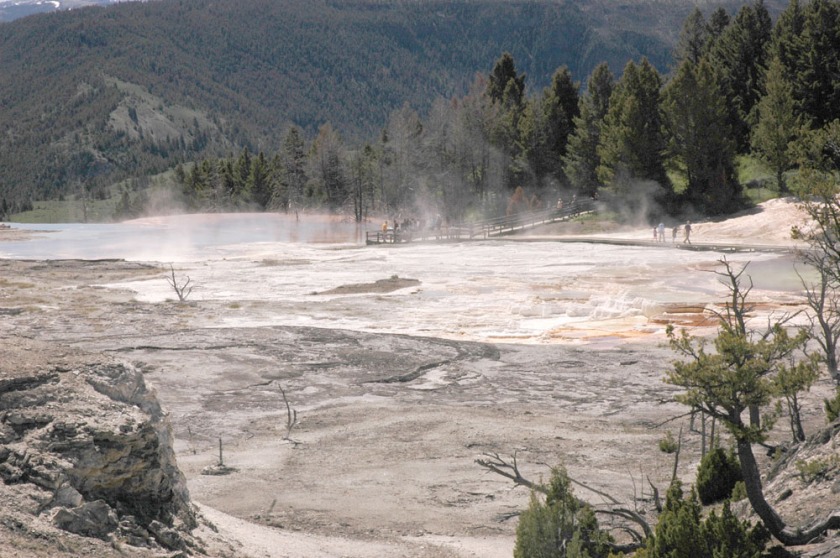 Our first stop was the Mammoth Hot Spring Terraces.

The landscape was so foreign 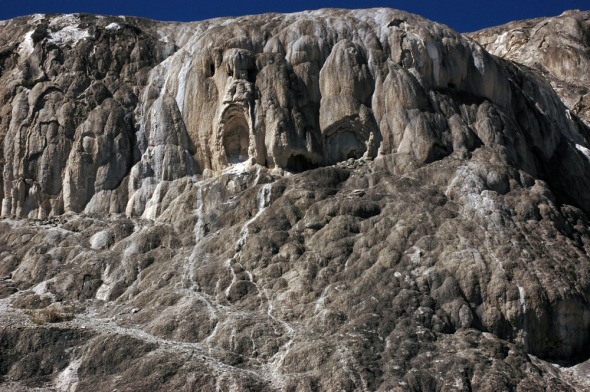 that I felt like I had stepped onto a different planet,

or perhaps the moon.

Boardwalks drew lines across the surface,

zigzagging back and forth, 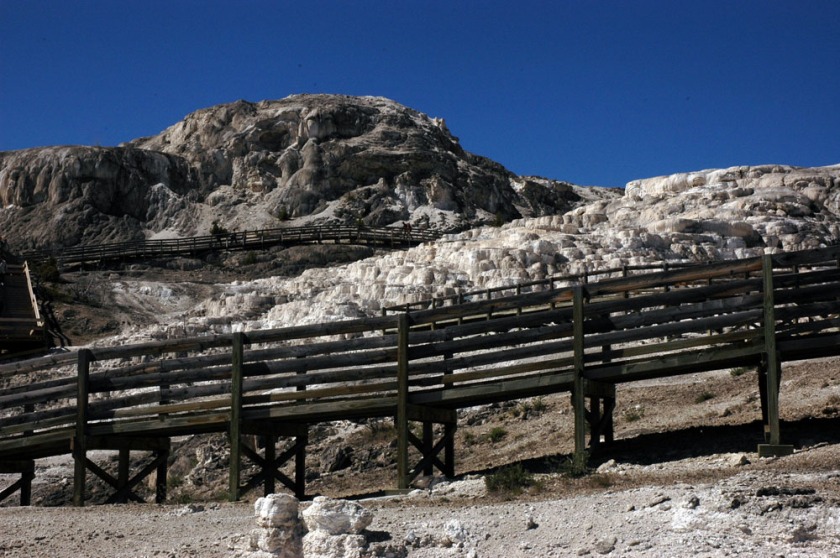 climbing up to an elevation change of 300 feet.

We were at Jupiter Terrace (which I thought was an appropriate name even though I’ve never been to Jupiter and can only imagine). In the 1980s Jupiter spring “flowed so heavily that it overtook boardwalks several times.  It has been dry since 1992, but when active, its color and intricate terraces make Jupiter an appealing spring.” (National Park Service – Jupiter)

Even though it was clearly dangerous,

The park signage said to allow a minimum of 2 hours to walk the trail system. Being on a blitz trip though the park, we walked a little ways, retraced our steps and returned to our car. 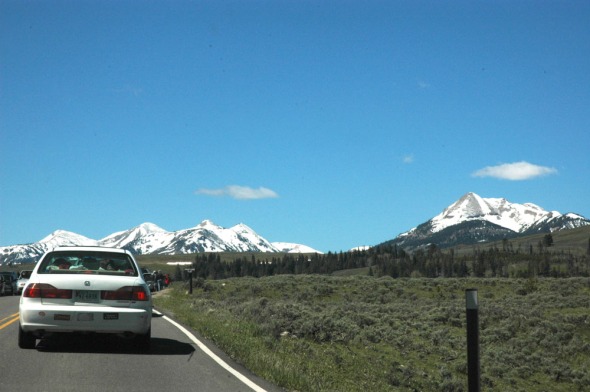 We saw groups of what might have been deer grazing along the roadside, 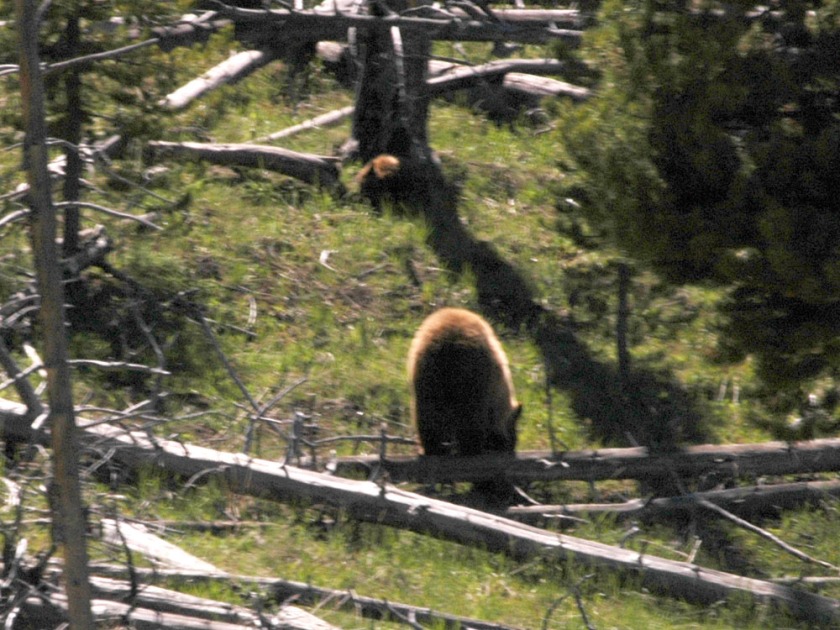 and a mama grizzly with a cub (near the top at the bottom of the tree).

We drove by fire-decimated forests, struggling for a new foothold,

and steam rising from the mountainside,  a constant reminder of the persistent furnace pumping out heat below the surface.

We saw a herd of bison, old and young,

and adults drinking from clear water. 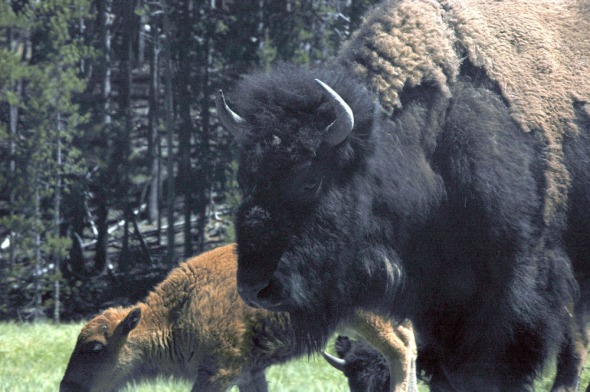 up close and personal.

The road system inside the park is a figure eight. We entered at the top left of the eight and drove around to the bottom right point of the top circle to get to the Yellowstone canyon. 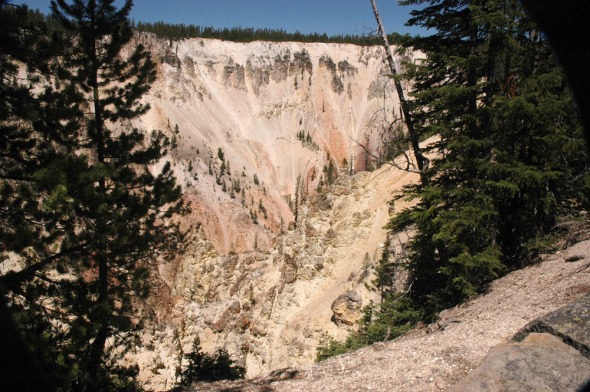 I wish I could tell you more about the canyon, but we weren’t able to spend a lot of time there and it’s been two years. I believe we might have gotten out at the Artist Point overlook, but don’t hold me to it.

We did see the falls. But whether this is the upper or lower falls, I couldn’t tell you. Perhaps you know?

The stone along the canyon walls was very yellow in most places, providing the inspiration for the name of the park.

We left the canyon and traveled southeast along the lower circle of the figure eight drive,

where the liquid was visibly boiling.

In that same area, we saw a circular hole filled with 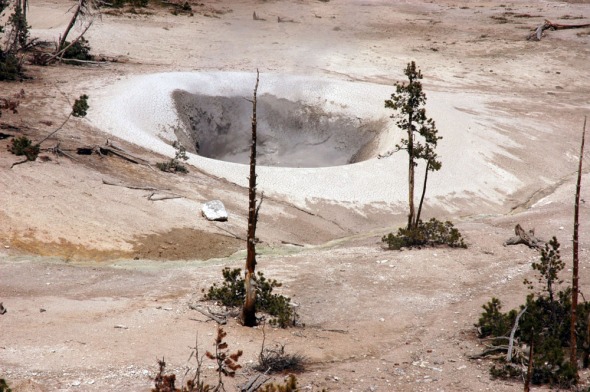 We drove on towards Old Faithful, passing Shoshone Lake. During Yellowstone volcano’s last eruption, “the park’s central portion collapsed, forming a 30- by 45-mile caldera, or basin. [. . .]” The lake occupies the southeast corner of the caldera. “Just north of the lake the land surface rises and subsides. This suggests that the Yellowstone caldera is not dormant and will likely erupt again.”  (National Park Service brochure – Yellowstone).

The Yellowstone visitor’s center lists the times Old Faithful is predicted to go off. When we arrived there was just a little steam rising out of it. 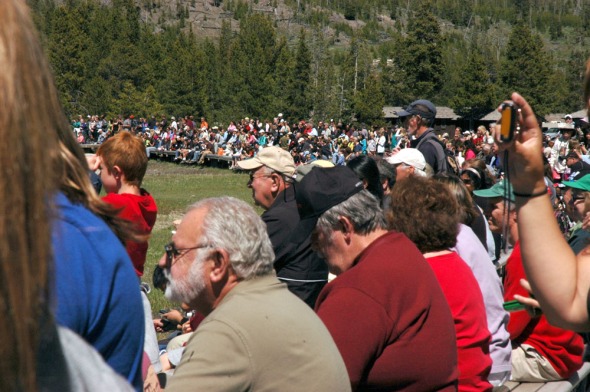 But a crowd had gathered, and we saw that we had arrived just in time. 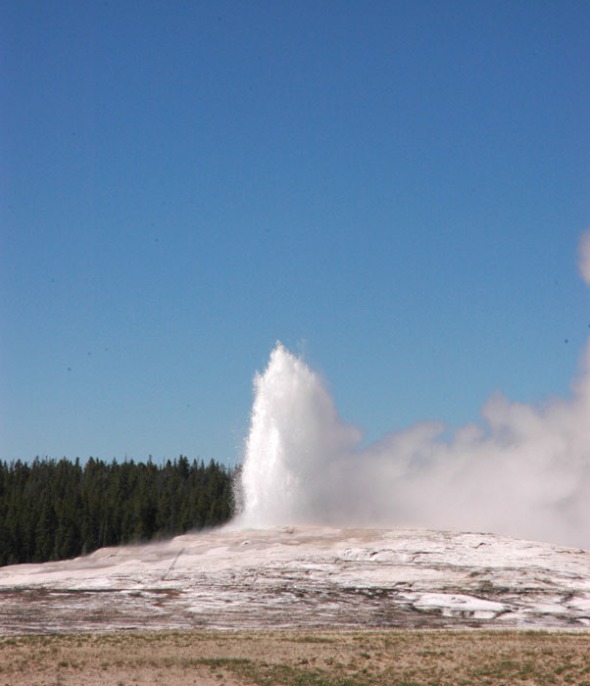 It started off small, 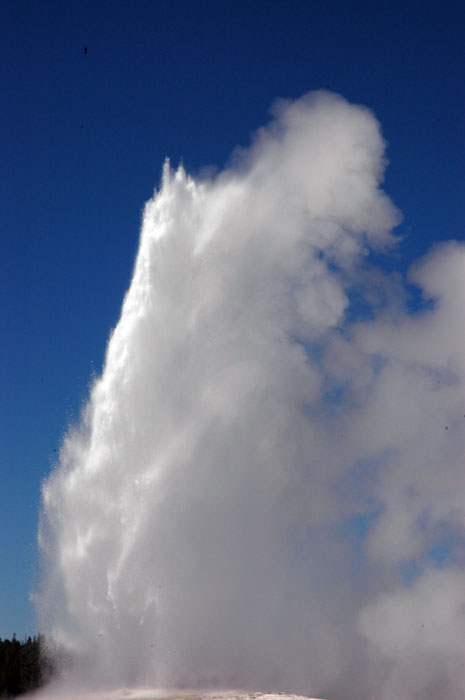 After hearing about Old Faithful all my life, it was an amazing thing to behold.

You can read about how geysers work at the National Parks website.

We first saw the Midway Geyser Basin, our final stop on our day at Yellowstone, from a distance.

There we were back to the boardwalks again, and heading towards what could be the smoke from a raging inferno for all we knew. 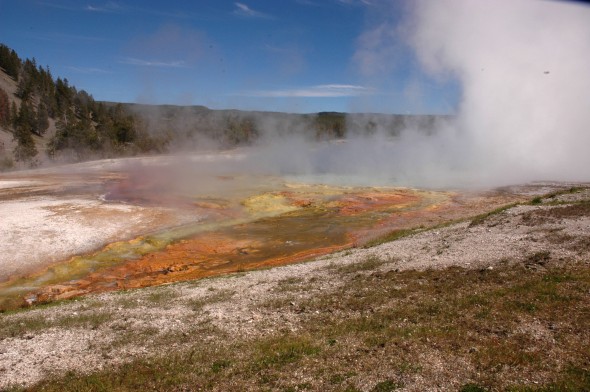 The 1/2 mile boardwalk trail first took us past the bubbling blue water from the Excelsior Geyser. 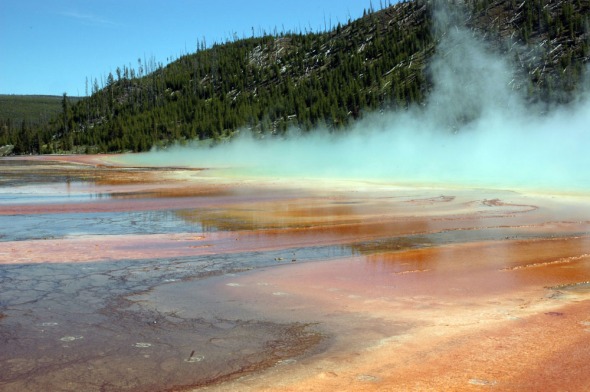 Next we circled past the Grand Prismatic Spring, Yellowstone’s largest hot spring, and one that provides a photographer’s paradise. 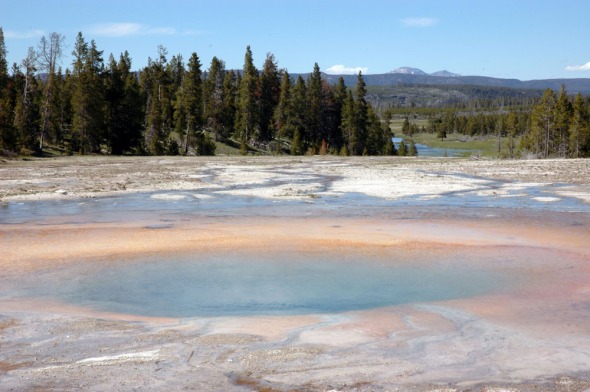 I believe this is the  Opal Pool near the end of the circular trail. I found the pastel colors here enchanting.

We ended our trip to Midway Geyser Basin, and Yellowstone Park, at the Turquoise Pool—the colors here have to be seen to be believed.

Two years later I still don’t know what a fumarole is.

But Yellowstone is absolutely worth a visit. If I made it out alive, you probably will too.

33 thoughts on “Someplace you might otherwise avoid, but have got to see — Yellowstone and its bubble and boil”