Of some of the more popular New Orleans neighborhoods: CBD (Central Business District), Uptown, Marginy, the French Quarter, and Treme,  it probably comes as no surprise that Mark and I stayed in the Garden District while visiting our son Mark Joseph last month (map of New Orleans).

The Garden District originated from subdivided plantations that once lined St. Charles Avenue upriver from the French Quarter. Named for the lush gardens surrounding the Victorian mansions later built by wealthy merchants and planters, today the Garden District is a neighborhood of private residences and B&Bs. Sandra Bullock, Nicholas Cage, and Peyton Manning are among the more notable residents of New Orleans’ Garden District.

We spent our first night in New Orleans at the Avenue Inn on St. Charles Ave.

Our room was spacious, the continental breakfast was good, and we enjoyed our hot morning beverages while watching the street car from the wooden rockers on the front porch.

The remaining three nights of our trip we spent at Sully Mansion Bed And Breakfast, also in the Garden District.

Our room was of moderate size, but large enough for our needs. The inn-keepers Guy (pronounced “Gee”) and Nancy were very pleasant and helpful. The food was good. In nice weather they have seating in the courtyard around the side and behind the house. 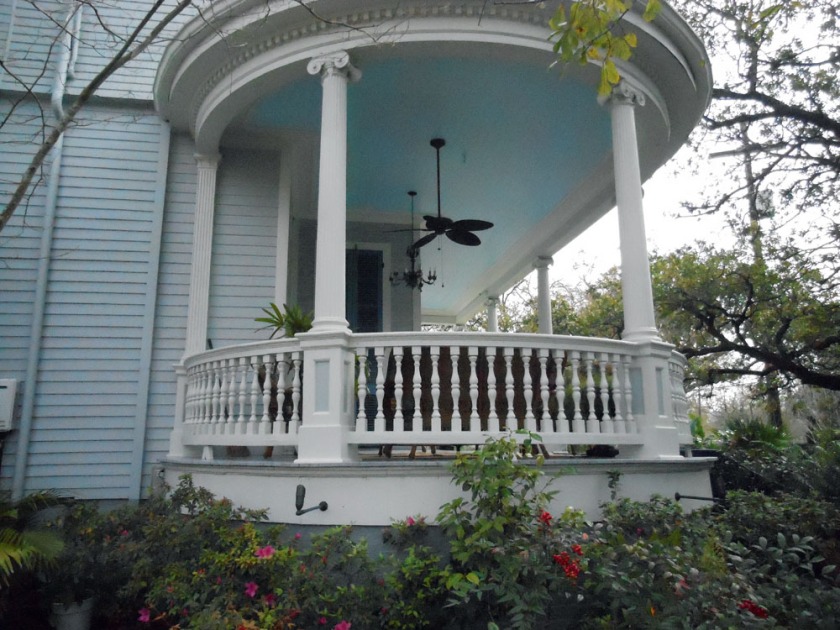 Again, we enjoyed sitting on the front porch with our coffee and tea.

Many of the homes in the Garden District are decorated with the beautiful ironwork the city is known for.

On the opposite  corner from Sully Mansion, Colonel Short’s villa is enclosed by one of three famous “cornstalk” fences in New Orleans.

The walled Lafayette Cemetery, laid out in 1833, is just down the street from Colonel Short’s villa.

It was the second Protestant cemetery to open in New Orleans, and was full by 1840, mostly with yellow fever victims. Above-ground vaults stand silent within the walls of the cemetery.

You can see evidence of Mardi-Gras festivities throughout and many of the photos from my After Mardi Gras post came from our walk around the neighborhood.

The Garden District is a lovely place to stroll through on any visit to New Orleans. I highly recommend it.

14 thoughts on “The Garden District in the Crescent City”