I just looked at my last garden update for you about a month ago. The spring bulbs are no longer blooming, but amazingly enough the lenten roses are hanging in there. The irises are in full bloom and the knockout roses have started flowering. The columbine, one of my favorites, are blooming in the shade with the sweet woodruff and lilies of the valley. The bleeding hearts are long gone. The Siberian iris have also bloomed. And the peonies have just started.

I took photos on three separate occasions beginning May 10th, but am just now getting around to posting them. I hope you enjoy my May flowers.

The columbine bloom at the lowest level of the St. Francis garden in the shade. 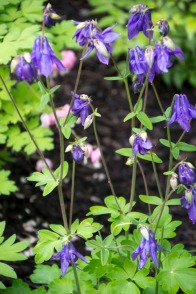 A close-up of one variety of columbine. 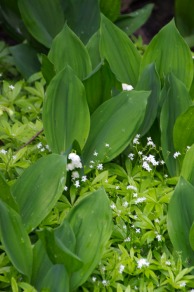 Sweet woodruff and lily of the valley

A second variety of iris.

Don’t mind the little white dog with his tongue hanging out.

The Lenten Roses are still in bloom.

Perrenial sage is a lovely accent, but it will get scragly and have to be trimmed later.

Siberian iris followed the other iris.

The peonies have started blooming.

Believe it or not, we still have areas of Chameleon Ivy to contend with. Mark experimented with using landscape cloth covered with mulch. He thinks it is working. I think the ivy is just tunneling under it and coming out the other side. This is especially apparent along the steps to the woodland garden. I’ll have to get outside with my ivy extraction equipment.

We do have a few sunflowers coming up. At least I think they’re sunflowers. I think they sprouted from seeds the birds dropped from the feeders. They’re not planted where I might have placed them were I doing the planting. But I always love volunteers.

We’ve planted a few other annuals here and there, and have switched out the pansies in our deck flower boxes for red geraniums. I didn’t include photos of the annuals, even though I love them and think they add wonderful and usually dependable color to the garden, but they are predictable and come from a store (unless you grow them from seeds which I attempted to do yet again to no avail).

The perennials rise from the earth like magic and then bloom. I don’t think I’ll ever get used to it.

8 thoughts on “May flowers”