After a stress-fraught couple of months while our daughter Anna was applying and interviewing for a new job, Anna accepted an offer from Humana in Chicago where she will begin working the third week in March. In a few short weeks, Anna will make the move from her comfortable and relatively spacious suburban apartment in Columbus, Ohio to an urban life-style in Chicago where rents are high and spaces are small.

Much has to be accomplished in a short period of time. Anna’s first priority was to find an apartment in a safe area.

Like most cities, Chicago is made up of distinctive neighborhoods with their own personalities all nestled together from the center of downtown Chicago out to the distant suburbs. Some neighborhoods are more convenient than others for commuters. Some are safer. Some are more fun.

Even though Anna was embracing an urban, mass-transit life-style, she wanted to be able to keep her car with her in Chicago. Parking can be challenging in the neighborhoods, so one of Anna’s higher priorities when looking for an apartment was to find one with an assigned parking space, if not a garage.

Another high priority was to have her own laundry facility in her apartment preferably, but at a minimum, in the apartment building.

A reasonably close distance and safe walk to mass transit, as well as a walkable distance to shops and restaurants,  were also important considerations.

Finally, the size of the apartment, and in particular, the storage space were important.

Anna was fortunate in that one of her college classmates works at Humana in Chicago and was able to give her guidance regarding neighborhoods she might want to consider. He also referred Anna to a Chicago apartment broker, Chardonnee, who proved to be invaluable.

Anna contacted Chardonnee and provided her with her apartment priorities and budgeted amount for rent. Chardonnee searched the MLS listings for apartments in neighborhoods Anna was interested in that met most or all of her criteria. Anna studied the lists Chardonnee sent her of good matches. With the help of her computer and Google maps, Anna spent hours mulling over the listings, plotting the apartment locations, identifying the locations of the closest metro stations for each one, evaluating the pros and cons of each apartment, and generating a list of seven apartments to visit.

I drove with Anna to Chicago last Wednesday to look at apartments with the hope that she could sign a lease before we returned home. We arrived in downtown Chicago and checked into our hotel then went out driving through the neighborhoods and past the apartments we would be seeing on Thursday with Chardonnee. This wasn’t a particularly productive use of our time, but I think it helped us understand where the neighborhoods were located relative to each other and how far out of the downtown area they were. The other benefit, I thought, was that we were able to see that Chicago, even though a large city, is one that is drivable. We were able to get everywhere we wanted to go without much difficulty.

Anna focused on the north neighborhoods of Chicago, where she could catch the red line metro into work in town. She was interested in the popular Lincoln Park neighborhood just north of the downtown area, but was not able to find an apartment that was affordable for a single person with her salary, without a roommate to share expenses. Parking was also either not offered, or an expensive add-on.

Lakeview, just north of Lincoln Park, is another nice area for young professionals, but we did not find anything affordable that met most of Anna’s criteria there either.

A little further out, Uptown, and Logan Square were two neighborhoods Anna looked at. We visited four apartments on Thursday (one of her top choices now had a lease application, we couldn’t open the lock-box on one to get in to see it (it didn’t have parking), and one of them had mini-kitchen appliances so we took it off the list), and Anna settled on one in Andersonville. Although it is located within a couple of blocks from a street lined with restaurants, shops and importantly a grocery, the disadvantage of her apartment is its nearly one-mile-distance from the metro. Otherwise it is a lovely condominium on the third-floor of a relatively small building. She will have an assigned parking space behind the building, and a stacked washer and dryer unit in the apartment. The room sizes are smaller than those in her current apartment, but she has a small den in addition to the single bedroom and living room spaces. She will have to continue making choices as to what she plans to bring with her to Chicago and either discard, donate, or store (most likely in our basement) those things she won’t have room for and can do without.

As for me, I am relieved that she was able to find an apartment where I believe she will feel safe and comfortable. Having never lived in a big city, I have some anxiety about Anna traveling about the city, especially at night, where she may have to walk a long distance by herself. Hopefully I will grow more comfortable with that idea with time. 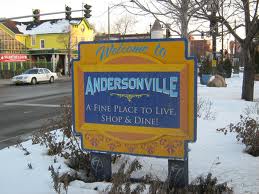 Do you have any experience with or tips for living in Chicago?