The Viking Tor left Koblenz for Cologne at 4:00 a.m., or so we were told, being fast asleep at the time. We arrived in Cologne, locally known as Koln, at 9:00 a.m. 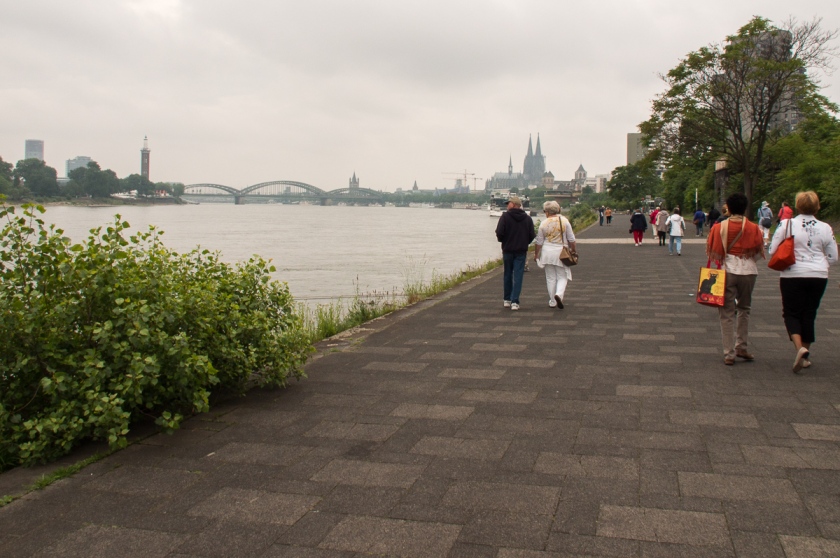 We left the ship and walked along the river to where buses were waiting to take us the short distance to the cathedral that you can see in the skyline above.

The cathedral is situated right smack in the middle of a downtown business district where the nonstop daily loading and unloading of tour buses created a bit of confusion with their traffic disturbance.

Construction on the Cologne cathedral began in 1248 and took over seven centuries to complete in 1880. It is a symbol of the city and an UNESCO World Heritage Site. During WWII 95% of Cologne was destroyed by allied bombs, but the cathedral survived. According to our guide, bombardiers were prohibited from hitting the church’s spires as they were a clear landmark by which to navigate.

Many people were gathered on the cobblestones surrounding the massive structure.

Our tour guide, who accompanied us on the bus, explained what he could about the exterior of the cathedral. Then a deep, loud, gonging started erupting from the bell tower of the cathedral as believers were called to Mass. As luck would have it, we were visiting on a high holy day and the church was closed to tour groups as masses were being celebrated all day. Our guide suggested we come back after the tour and try to gain entrance between the masses. 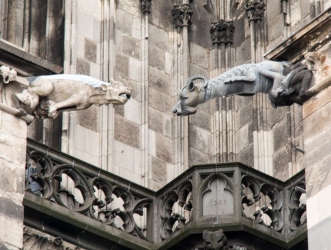 The bell continued to gong, reverberating through my body. I’d never heard anything like it. And it lasted for what seemed like a half hour, calling all to Mass. Although I was sorry not to be able to visit the inside of the church, I felt lucky that we were able to experience this amazing sound. The bell we heard only rings on the few high holy days in a year, so it is a special occurrence. 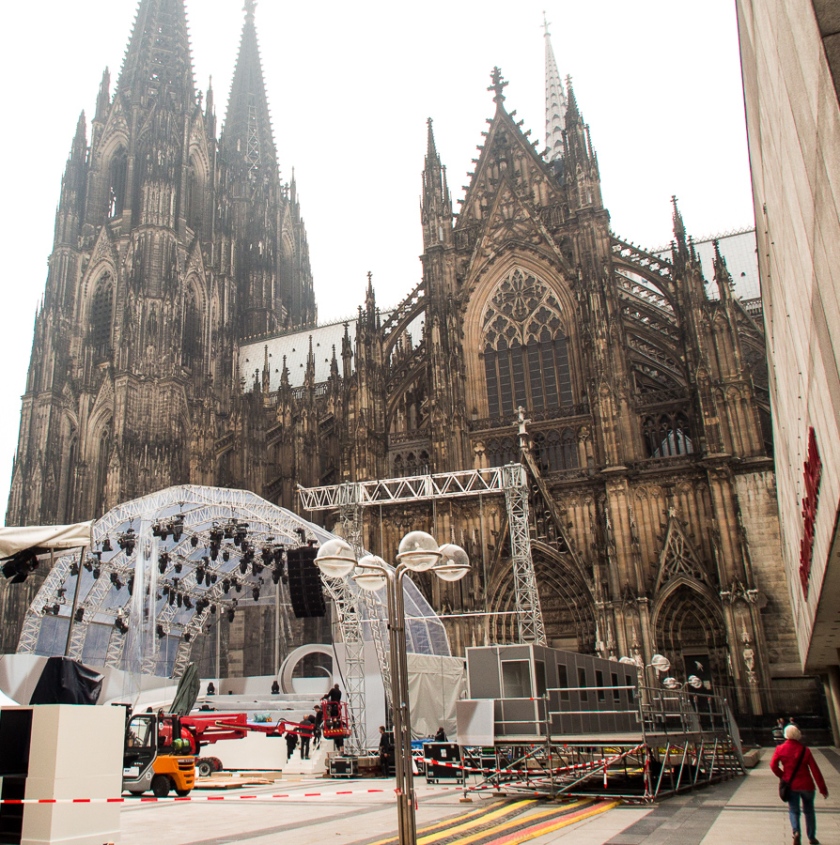 As we left the cathedral, we passed a construction crew erecting what looked like a stage for an entertainment of some sort. The ancient cathedral rising behind the modern-day band shell made an interesting juxtaposition of styles.

We continued on a walking tour of the old city. A Roman-Germanic museum is just across the walk from the cathedral. Inside are Roman artifacts and archaeological finds from Koln and the Rhine Valley.

The fine mosaic floor can be viewed from outside the museum. According to Rick Steve’s Germany 2009, this was once the floor of a rich Roman merchant in its original location. The museum was built around it. 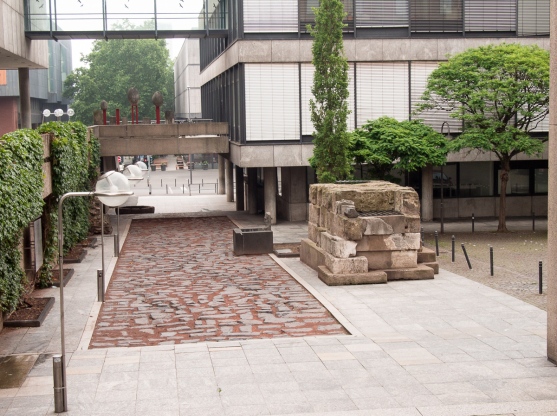 Nearby is a section of a Roman stone road beside a Roman fountain. 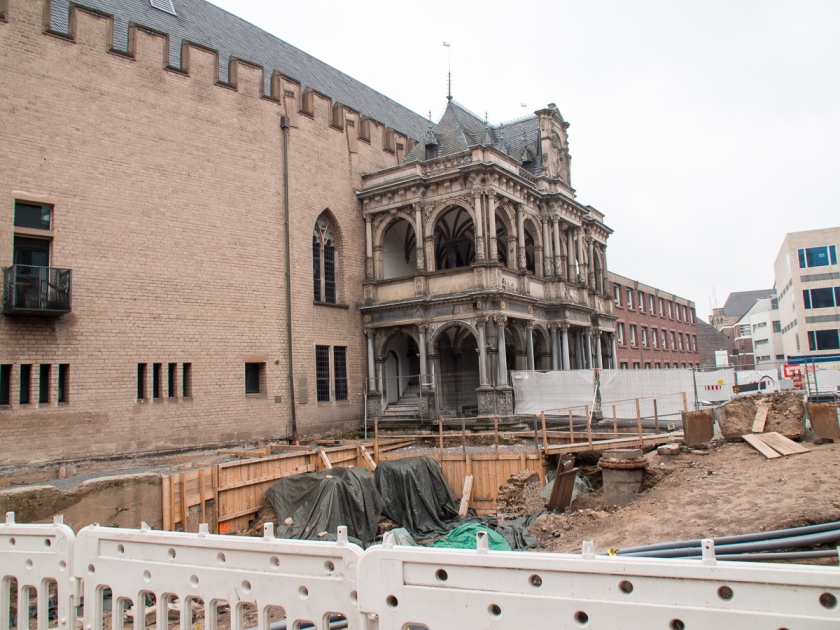 Our guide took us into the Jewish section of the old town that was under construction as an archaeological zone and Jewish museum.

In all honesty, I was having trouble paying attention at this point because we had not yet had a toilet break and I was beginning to wonder if our guide was ever going to realize we needed one.

I had pretty much given up on the guide to solve this personal problem and started looking around for an open restaurant where I might find a public toilet.

Since it was a high holy day, most places of business were closed. And although I had finally asked the guide if he planned on giving us a comfort break, he was not having any luck finding an open business with a public toilet. Finally, another tourist in our group pointed me to a building where I and several others took advantage of the kindness of the proprietor to allow us use of their facilities.

Too much information? I just want to say, travelers beware of holy days.

We passed by several inviting restaurants near the waterfront or on Fischmarkt.

These seats come with warm blankets for the brisk weather. 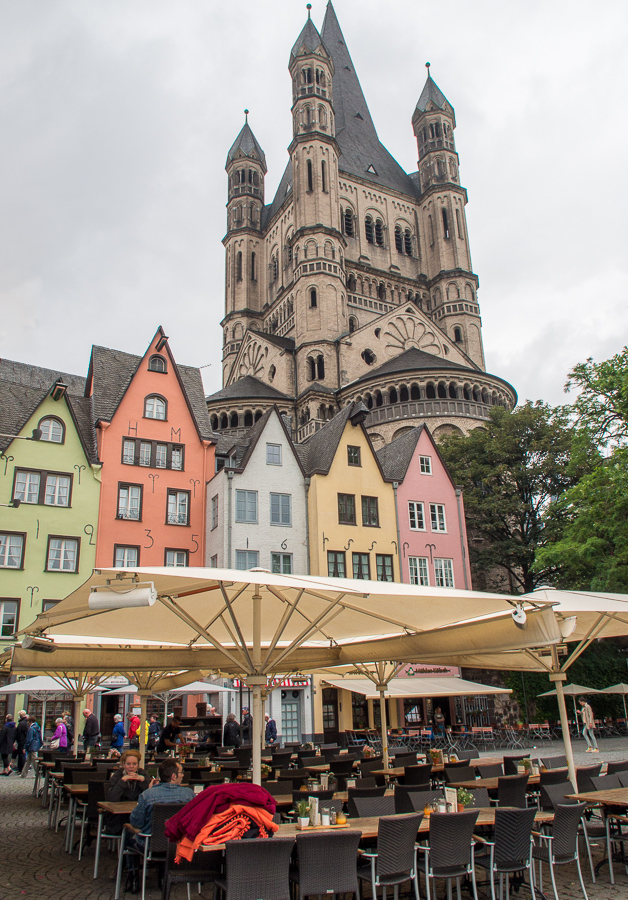 The colorful houses on Fischmarkt are picturesque, although I don’t know what the numbers mean.

Our guide left us with about an hour to spare before the first bus returned to the ship. Mark and I walked back to the cathedral with the hope of seeing inside. 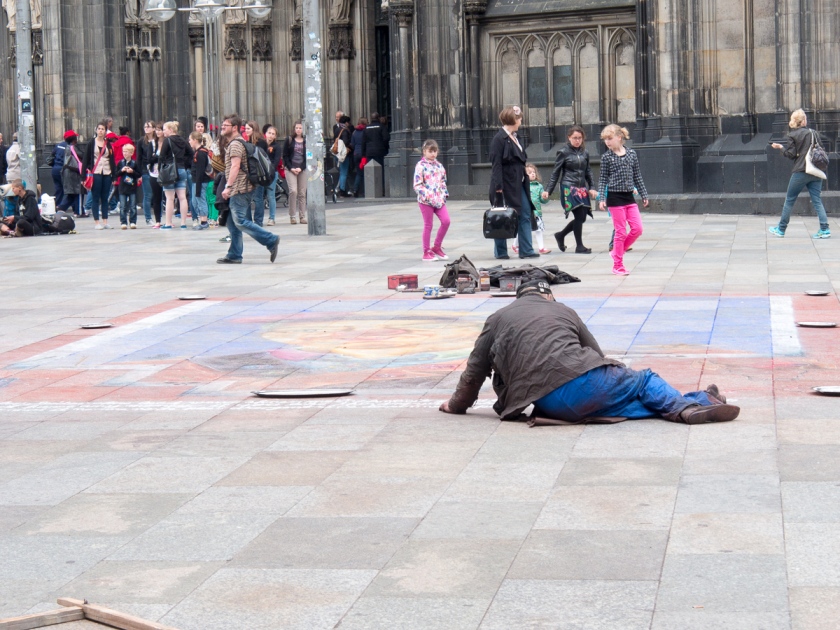 A street artist was busy at work on the cathedral plaza.

We entered the cathedral as the earlier mass let people out. A rope was set up to keep tourists at the back of the church, so we were not free to walk around.

But I managed to see enough to realize that the Cologne cathedral was equally impressive on the interior as on the exterior.

Viking had a shuttle running from our ship to the downtown area of Cologne leaving at 2:00, 3:00, and 4:00 p.m. and returning at 2:30, 3:30, 4:30 and 5:30 p.m. giving us ample opportunity to shop in or further explore Cologne. Had Mark and I been thirty years younger, we might have spent the afternoon there, but we were tired, and walking on the cobblestones of Cologne had worn out my knees for the day. We returned to the ship and relaxed.

Next up – Windmills in the Netherlands

See links to other posts about the Basel to Amsterdam Viking River Cruise.