Last Saturday, June 13, Mark and I attended the 25th Annual Fort Ancient Celebration: A Gathering of Four Directions, sometimes referred to as the Fort Ancient Pow Wow, with our photo group—Scoot and Shoot.

It was a two-day event filled with activities and demonstrations like talks about Herbs, a Dream Catcher Workshop, and Women’s Drum Demonstration:Struck by Lightning.

I bought a little pouch, like those hanging in the background, to carry my cell around when I am without pockets.

Frybread was a big item on the menu. I tried some with cinnamon and sugar and it reminded me a little of a thick, soft, cinnamon funnel cake. It was tasty, and no doubt fattening, which brings me to my next point.

I was given a short history lesson about frybread by the owner of the food truck I visited. When the US government forced the Indians to relocate to New Mexico, where their traditional crops of vegetables and beans wouldn’t grow, they gave them canned goods and the ingredients to make frybread: white flour, processed sugar and lard. By today’s standards, we all know how poorly this serves as nutrition.

“Frybread is revered by some as a symbol of Native pride and unity,” but it is also “ blamed for contributing to high levels of diabetes and obesity on reservations,” (Fry Bread, Inc). The Fry Bread link is interesting and worth a quick visit. 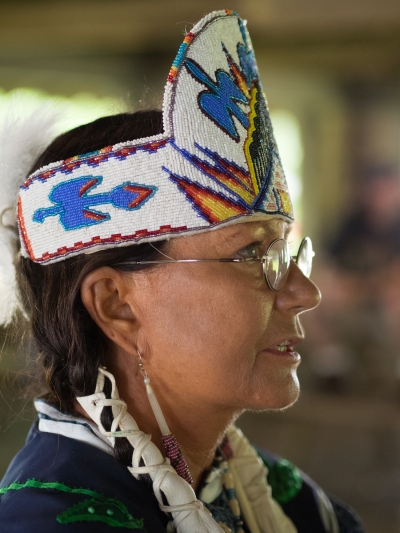 Generally, I like to take candid photos, following the implicit rule that if you are in a public place, you are fair game to be photographed. If I want to sell a photo I’ve taken of someone, however, I have to have signed permission. As a sign of respect, at this event, we were requested to ask permission before taking a photograph. We were granted permission to take photos of the Grand Entry with exception of a few particular times that included the veterans’ flag and honor songs. 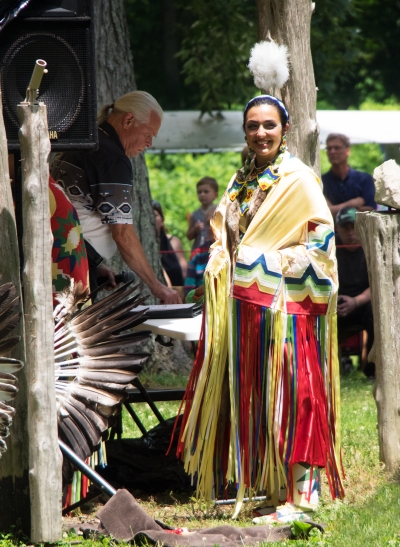 This dancer is waiting for the festivities to begin.

The Grand Entry was largely a parade of participants who entered the arena accompanied by live music. I found it to be meditative and soul-stirring. 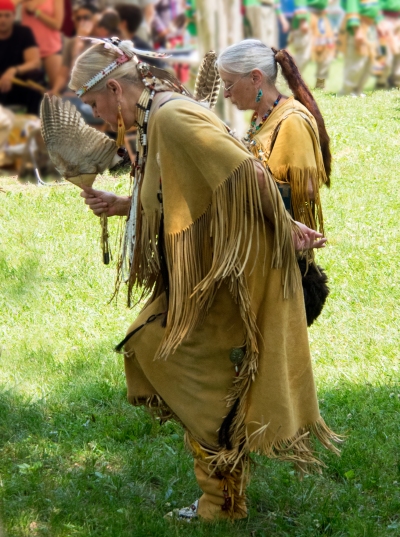 I spoke with the woman in front, in this photo, who told me she is 50% Native, but when she is not attending special events, she lives as the rest of us do. She is the mother of the young man with the long head dress in the above picture. The head dress was a gift from her. She is proud and happy that her son chooses to participate and honor his native heritage.

This tiny dancer captured my heart. I also photographed another young girl, a little older than this one, who I overheard was participating for the first time. I snapped a shot of her as she was lining up for the Grand Entry. She was standing, very attentive and solemn, beside a woman who was teaching her what to do. I neglected to ask for permission before I captured that moment, so I am not sharing it here.

Fort Ancient, the site of the gathering is located in Warren County, Ohio, on a plateau above the Little Miami River. It is a prehistoric site built during the Hopewell Culture from 100 BC to 500 AD and consists of earthen walls and mounds built and used by prehistoric people to mark the movements of the sun and moon. Fort Ancient was primarily used for ceremonial and social gatherings on certain days of the year, as identified by solar and lunar movements.

“Today the structure is considered to be the largest and best preserved prehistoric Indian enclosure in North America,” (Ohio.com, Celebration a Gathering of the Four Directions).

The people who built Fort Ancient mounds were of the Hopewell Culture, not a specific tribe. Beginning around 200 B.C. archaeaologists noted a new Native American culture developing and spreading throughout the Midwest. They named the culture Hopewell. Tribes that identified as being part of the Hopewell culture had an agricultural lifestyle and complex trading system and tended to reside near major waterways. In Ohio, the Hopewell culture in strong in the Ohio Valley, the Scioto Valley, and the Miami Valley, (Ohio History Central, Hopewell Culture).

You can read more about how the earthworks were made and function here: Ohio Earthworks.