My dad was a great fixer-upper. He knew how to do a lot of things: build with wood or bricks, fix plumbing, fix car engines. If it was something mechanical, he could figure out how to fix it.

I loved to go to the hardware store with my Dad. Just me. I don’t know whether I loved it so much because I loved the hardware store or because I craved the one-on-one time with my dad. Growing up in a household with four siblings, sleeping on the trundle bed in a small room with bunks occupied by two sisters, sitting at a kitchen table waiting while everyone was served, crowding four across the back seat of a station wagon, any time I was going anyplace alone with my dad was special.

But I also loved the hardware store with it’s scents of oil, leather and especially freshly cut wood. I loved the bins of shiny metal bolts, the spools of heavy chains, the long lines made by the smooth tubes of plumbing and the curved shapes of connectors, the stacked rows of lumber, and all the vast possibilities.

On this particular day when we were going to the hardware store, just me and my dad, I was excited and went out to wait in the car. The doors were unlocked, as everyone’s were in those days of the early 60s. I think people thought of the push down locks more as a means to keep children inside the car while it was moving than keeping others out while it was parked.

One of my classmates fell out of a moving car once. I know this because her mom was driving me home one time. I was sitting in the middle of the front seat between my classmate and her mom when my classmate opened the passenger door. I don’t believe she fell out that time. As faulty as my memory has become, I’m pretty sure I would have remembered that.  But based on what I heard, I believe that she had fallen out before. I do remember her mother’s frantic scream with a litany of threats or warnings about falling out that has lasted me a lifetime. You can bet I lock the door when I’m in a moving car. 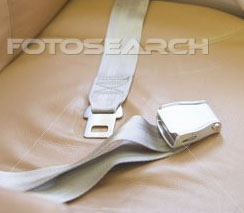 I was waiting for my dad in the car and I slipped behind the steering wheel to pretend I was driving. I knew I wasn’t supposed to play in the car or touch anything, but I was keeping an eye out for my dad. Then I noticed the new seat belt my mom had gotten him for Christmas and he had installed. It was the original simple lap belt that didn’t retract but was adjustable, very similar to airplane seat belts that you have to flip open the side of the connector to disconnect. Unfortunately, I didn’t know that.

I decided to try out my dad’s seat belt. I connected it across my lap just fine with a click. And then I couldn’t figure out how to get it back off. I pulled. I examined the connector. I turned it over and pushed on a little tracking button on the bottom. I pushed on this little tracking gizmo, and pulled on the belt and I felt it move a little. I pushed and I pulled and it shifted a little more. I was getting frantic. I was going to get caught playing with the seat belt behind the steering wheel. I had caught myself red-handed.

I’m not sure how I got out of that seat belt, but I did. And it wasn’t by flipping open the clasp. Panic helps us do great things.

I was safely settled in the passenger seat with the sweat that had been dripping in my eyes dried off my face by the time my dad got in the car, at which point I showed interest in how the seat belt worked and asked him, with a nonchalant air, how he got it off.  Just wondered.

Today I wonder why I was so afraid of being caught in that seat belt.  I don’t remember ever getting in big trouble with my dad, or my mom either for that matter.

But then maybe my propensity towards panic kept me out of untold troubles.

“By the 1930s in America, the automobile had been mass-produced for several decades, and more and more people were car owners. Yet an estimated 30,000 people died each year in car accidents. In light of these alarming statistics, a group of doctors banded together and created lap restraints for their own vehicles. After initial testing in their cars proved a success, the doctors urged car manufacturers to make the seatbelt standard on all vehicles, as they were on aircraft.” (The History of Seatbelts-eHow.com)

By 1965 all 50 states had laws requiring seat belts for the front seats. Two years later they were mandatory for all seats. Car makers weren’t required to provide seat belts until 1975, although many, if not most, did.