I know other people do it. I’ve seen dogs at beaches, at rest stops along the road, at state parks . . . Other people sometimes travel with their pets, so we decided to give it a try.

We found a pet-friendly cabin at Hocking Hills State Park in Ohio and booked it for two nights. It was close enough, about a three hour drive, and we were only going for a short stay. I didn’t know what to expect from a cabin where pets that could be much larger, more prolific shredders, and less well-behaved than Arthur, if you can imagine that, were allowed. Maybe I would discover that I am in fact allergic to dogs and would fall into an interminable sneezing fit.

And we didn’t know exactly how Arthur would respond, and just how big of a pain it might be to attend to his necessary trips outdoors someplace where we couldn’t just let him out the door, go back to our sofa, and wait to see his little face in the door side lights when he was finished.

Better to keep the stay short and not take any chances on being stuck somewhere in a full-blown allergy attack, having to traipse outside in various states of dress in whatever conditions the weather decided to provide.

We made it to the cabin, and at that point I would say Arthur was only doing so-so, partly because of the car ride.

You see, Arthur made it pretty clear he did not want to ride in the back seat by himself. Usually when we go someplace either it is just he and I and he rides strapped into the front passenger seat with his harness, or it is a short trip for the three of us and I hold him in the passenger seat while Mark drives—not the safest way to go, but sometimes we bend the rules.

He clearly identifies himself as a lap dog.

Anyway, Arthur did not get off to a good start on his trial-run of traveling with us with all the crying, barking, and carrying on he did at first. But when I told him that if he kept it up he was going to fail his trial run and not be included in future trips, he calmed down, curled up, and silently sulked.

The second strike against him was when he immediately went out on the screened-in porch upon our arrival at the cabin and relieved himself. Sometimes I just don’t know what he is thinking. 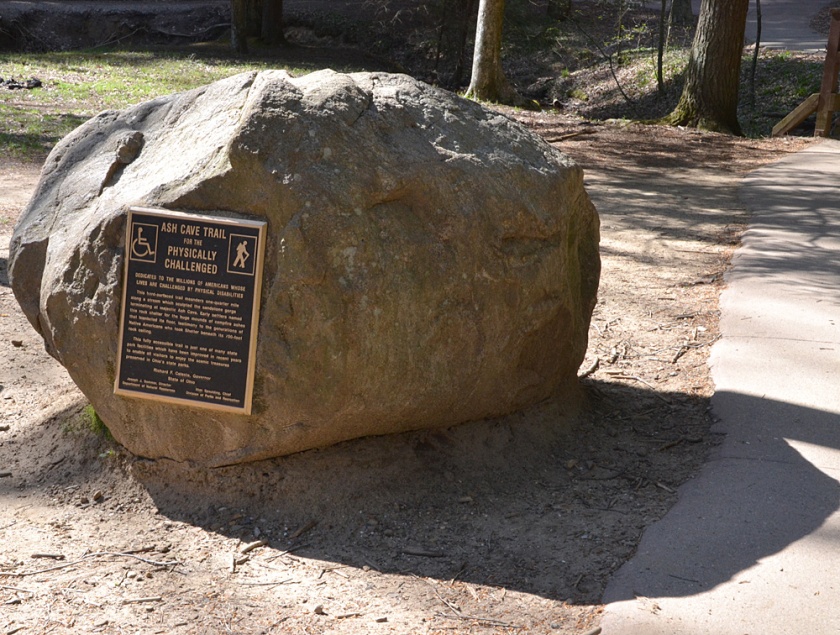 Hocking Hills State Park is probably best known for Old Man’s Cave, but there are quite a few other interesting geological sites throughout the park. We started our visit at Ash Cave, which  we noticed was a trail for the physically challenged. And you can see on the right, it is a paved path all the way to the cave’s falls. Mark and I were the most physically challenged people on the trail with my arthritic knees and Mark’s replacement parts.

Along the path we saw crevices and small caves like this one. My inner child yearned to run exploring, or play hide and seek, or live here for a while.

I don’t know if people actually did live here, but the cave got its name from the large amount of ashes that were found here left by native people or early settlers.

The path is at the bottom of a canyon with steep walls and was formed by water dissolving the softer minerals but leaving the harder rock.

I think Mark and Arthur are technically in Ash Cave here, which is more like an indented space beneath a large overhang.

The ground in the protected space is largely dry and composed of sand.

Overhead a streams runs along and drops over the edge of Ash Cave forming the falls that collects in a shallow pool. 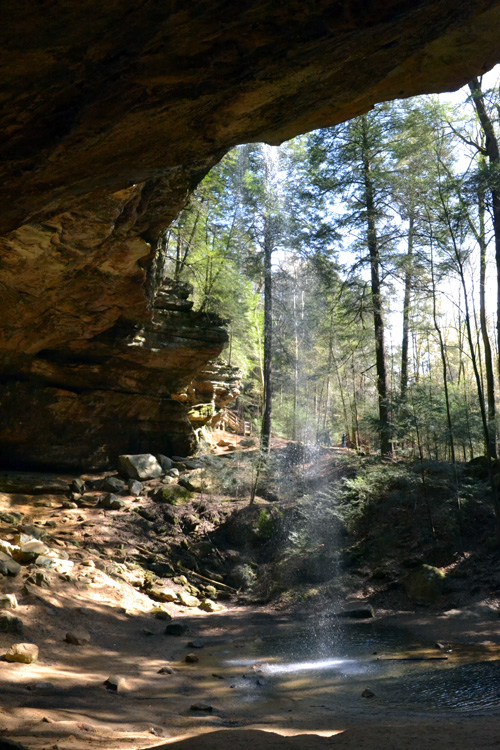 You can walk completely behind the falls. It is a large space. 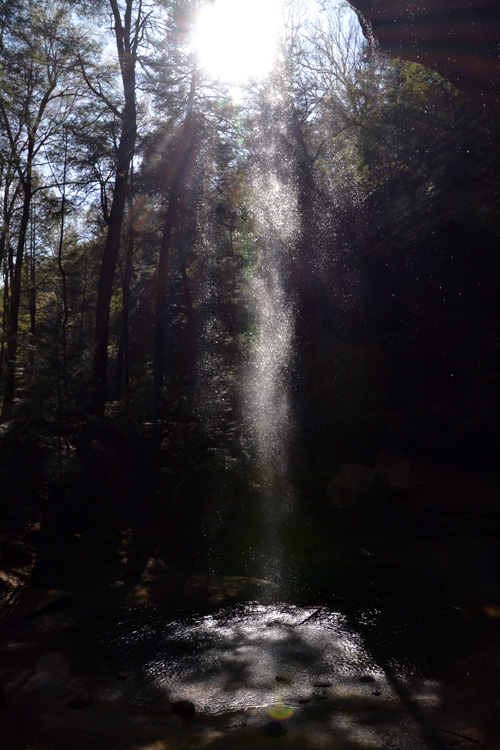 And in the late afternoon as the sun begins to lower to the earth, it shines through the water for a magical effect.

Arthur redeemed himself by proving what a good hiker he was, even if the trail was more like a sidewalk than a path.

Back at the cabin Arthur spent most of the time sleeping alternated with sniffing all around. I think he was trying to figure out just who was here before us. Hopefully whoever it was had better manners than Arthur.