Mark and I enjoyed our Iconic Cincinnati tour so much that we decided to take another American Legacy Tour. This time we went underground.

The  Queen City Underground: Bosses, Breweries, and Burials tour from American Legacy Tours is billed “a stroll through the Gateway District, home to America’s largest set of historical landmarks.”

John Funcheon was our informative and entertaining tour guide. He knew a LOT about Cincinnati’s Over the Rhine area. He also was very good at jumping from a normal speaking voice to a loud projecting voice when a noisy truck rumbled past.

At our first stop, John pointed out the Italianate architecture on the buildings across the street. This style of architecture is predominant in the OTR district.

When the Germans came to Cincinnati in the 1800s, they settled in Over the Rhine. OTR became a thriving community, boasting a population of up to 48,000 people at its height (the population would later plummet to about 4,000 as people moved to the suburbs). In the 1800s, theaters, breweries, saloons, bars, and beer gardens lined the streets.

The theater in this building hosted a shooting competition sometime around 1875. A well-known marksman, Frank E. Butler, was coming to town. A young Ohioan woman named Phoebe Ann Moses, who learned how to shoot out of the necessity to provide food and money for her family, entered the contest. Much to his surprise, Phoebe beat Frank Butler, and married him later. Phoebe continued to perform under the name Annie Oakley. You can read more details of Annie Oakley’s life at  Women in History or The Dorchester Library. 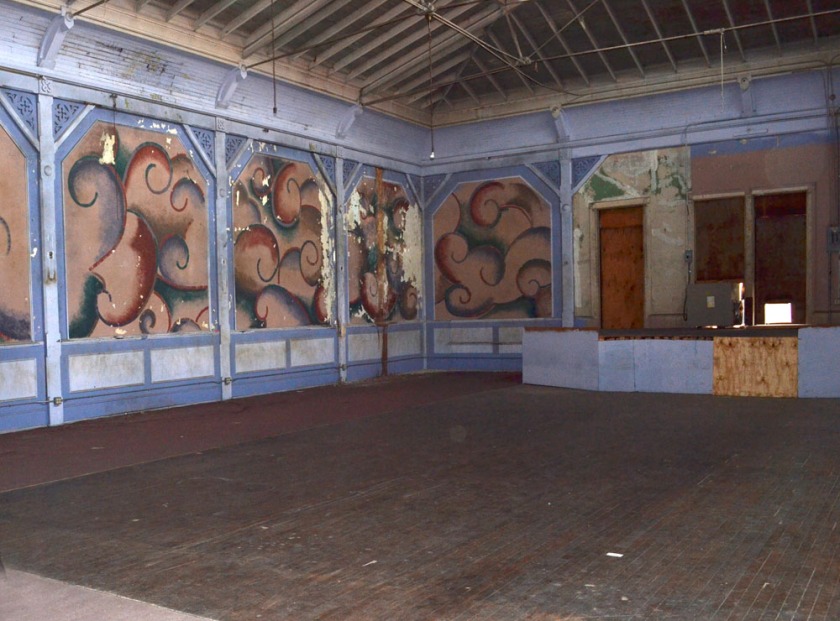 The Cosmopolitan Theater in Germania Hall at 1313 Vine Street navigated through the changing times in Over the Rhine.  It was built in 1855 as a beer garden and dance hall. In the 1890s, it was renamed Cosmopolitan Hall. “Over the decades, it was used for several different things, including a Prohibition-era speakeasy, an indoor golf complex, insurance offices, a lighting retailer, and a wallpaper store. [… ] In the early 1990s, the second floor dance hall was renovated for scenes in the movie A Rage in Harlem.” (From Creepy Cincinnati.com) More recently the building became The Warehouse, a notorious bar and entertainment venue. It has been empty since the Warehouse closed in 2004.

Henry Holtgrewe, Cincinnati’s ‘strongman’, performed on stage here at the turn of the century. He entertained people by lifting crazy heavy stuff. One of his more famous feats was lifting two baseball teams in a ball park. Eleven players from Cincinnati, and eleven players from the Cubs stood on a platform. Holtgrewe got under it and raised the men in the air with his back. Our well-informed tour guide, John, told us this and other entertaining stories. I subsequently read more about Henry in his obituary posted in The Day, January 4, 1917.

In 1873 Henry Wielert established a bar in this building. The beer garden, behind the building, sported a glass dome where patrons were entertained with a 40-piece symphony orchestra. Some pretty interesting meetings probably took place in this building. George Barnsdale, known as “Boss” Cox, held some of his meetings here.

John explained to us how Cincinnati fell under the control of “Boss” Cox, “one of the most infamous and powerful political bosses in American history.” (American Heritage pamphlet). But truthfully, I don’t have a good mind for politics and most of what John said just washed right over me. I did later read about Cox’s “drumming up illegal voters” for favored candidates and the way he stopped police raids on his bar by running for city council in Cincinnati in 1879, and serving for two terms.

“While Cox never held political office after his second term as city councilman, he virtually ran the Cincinnati city government by becoming a city boss. Like other city bosses, Cox used gifts and money to build support for himself among the working class in Cincinnati. During elections, Cox would then have his followers vote for the candidate that he supported. [. . .] By the late 1800s, if a person sought a political office in Cincinnati, he had to receive Cox’s endorsement to win the office.” (Ohio History Central)

One thing I do remember about John’s informative and entertaining tour was that the “speak easy” that sprouted up after Prohibition, wasn’t a loud or boisterous place like portrayed in movies. Speak easys were so called because no one wanted to rouse suspicion by being noisy when they were imbibing on the sly.

So far we hadn’t really been underground on this Underground tour, but that was about to change.

In the mid-1800s, it really wasn’t safe to drink the water. And many people didn’t. They drank beer instead. Although the beer that they drank during the daytime was only 2% alcohol.

All this was good for the brewery business. And breweries popped up everywhere in the Over the Rhine district where the Germans knew how to make and drink their beer.

Construction on the building now called the Guildhaus was begun in 1880 by the nephew of a local brewer, John Kauffman.  The brewery expanded to a location across Hamer Street where a bottling plant was established.  Like most others, this brewery produced beer until Prohibition in 1919.

I can’t tell you what happened in this building over the next 80 or 90-some years, but recently someone purchased it to turn it into apartments. The new owner was looking at blueprints of the site and noticed a sub-basement on the drawings. So one day he got a jack-hammer, and cracked through the basement floor creating an entry into a maze of tunnels, and cavernous rooms with arched ceilings, below. 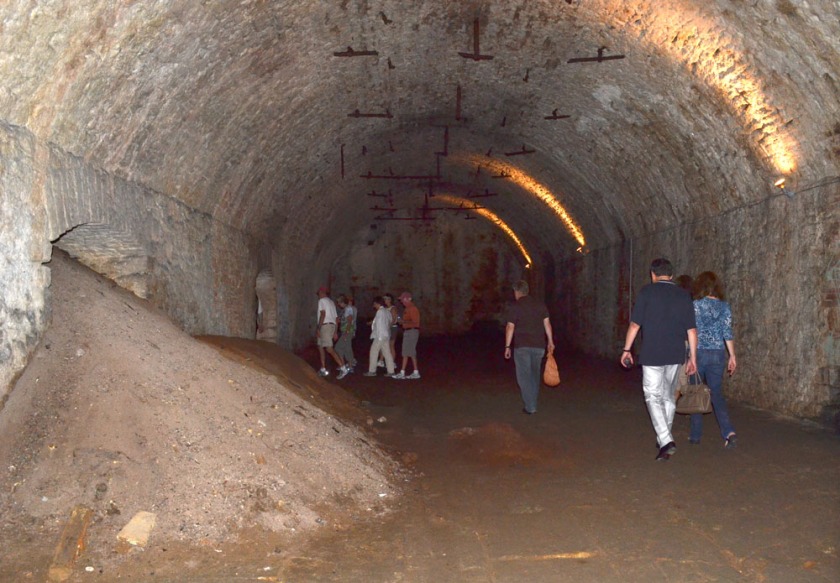 In the 1800s, before refrigeration, beer was made below-ground because the temperatures were cooler. Beer needed to be brewed at 43 degrees. The caverns underground naturally maintained a temperature of about 55 degrees. Ice was brought in from the frozen great lakes in the winter, and cold water was run through pipes lining the ceilings to cool this sub basement from 55 degrees to 43.

Once refrigeration became possible, the brewery moved the production up one floor to the basement because it was better and easier for several reasons. They left a hole open in the basement and refuse, largely composed of coal ash, was simply dumped into the sub-basement creating a large pile over time.

This is why you pay to go on these tours. There is simply no way I can explain to you how cool it was to be underground, in these rooms, imagining the people who worked here.

When Kaufmann expanded his production facility to include a building across Hamer Street, he built a tunnel going under the street and joining into the sub-basement on the other side. John said there is evidence that a large percentage of the buildings in this area of the city have sub-basements. 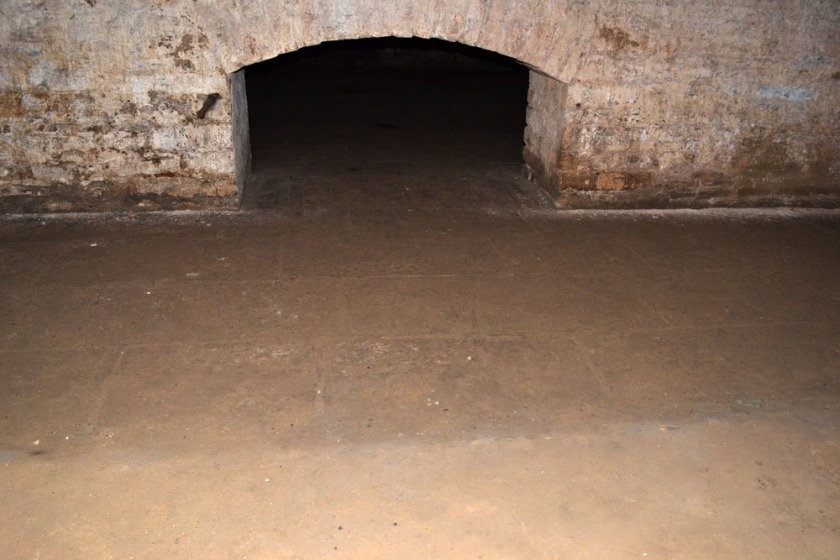 The process of beer-making created undesirable gasses like carbon dioxide and monoxide which had to be vented somehow from this enclosed below-ground space. Small openings at the bottom of the walls that look like fireplaces served that purpose. Again, I probably should have been paying closer attention, but I was trying to figure out why the once-stone floor was now covered with dirt. John later explained that the building leaked, and over the years dirt had made its way in with the rain.

“By 1919, Prohibition had driven most of the breweries out of business. Christian Moerlein alone had employed over 500 people. Along with World War I sentiments, this was the beginning of the decline of OTR’s population and cultural homogeneity.” (Cincinnati.com)

The population of Over the Rhine is now growing again for the first time in 90 years. The Guildhaus now contains highly sought-after apartments.  The stately building, making a comeback in the Over the Rhine renaissance, gives off no outward sign of the secrets that lie beneath.

Mark and I would like to find out more about the beer-making families in Over the Rhine. One of Mark’s ancestors is a Gertrude Niehaus.I suspected Gertrude was from a family of beer-makers because of research I had done about the Niehaus families in Cincinnati at the time. When I was doing research for this post I came across the Queen City Chapter.com and found a Captain Henry Niehaus who operated THE HENRY NIEHAUS BREWERY located on Sycamore Street near 13th  from 1861 to 1868, and a Joseph Niehaus who established the  NIEHAUS BREWERY, an ale brewery, on Woodward (now 13th) from 1850 to 1862. It would be fun to make a connection into one of those families. 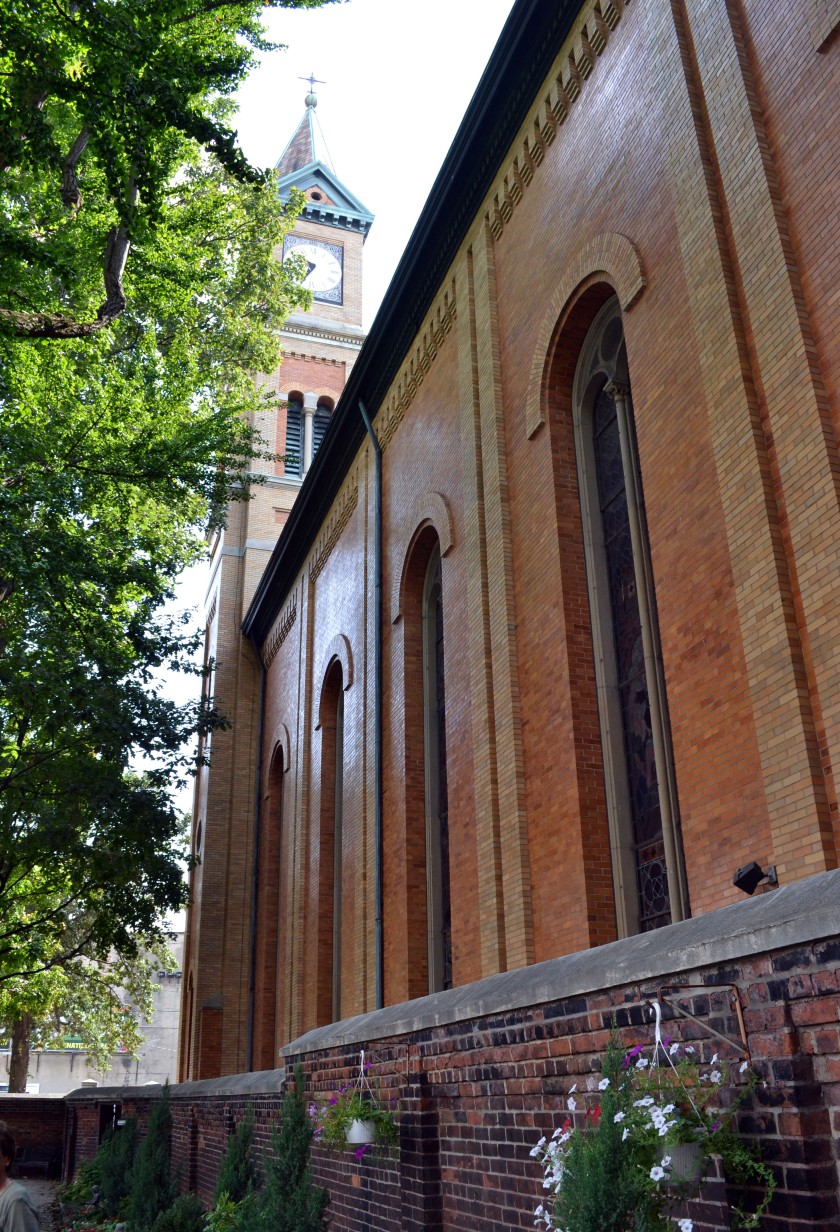 Our last stop on the Underground tour was St. Francis Church, just across Vine Street from the Guildhaus.

When this church was built a cemetery on the site had to be moved. A mass grave was created in a crypt under the church for those individuals whose families didn’t claim or move their burial site. Cracked tombstones line the walls,

and whole, intact tombstones pave the area above the grave. 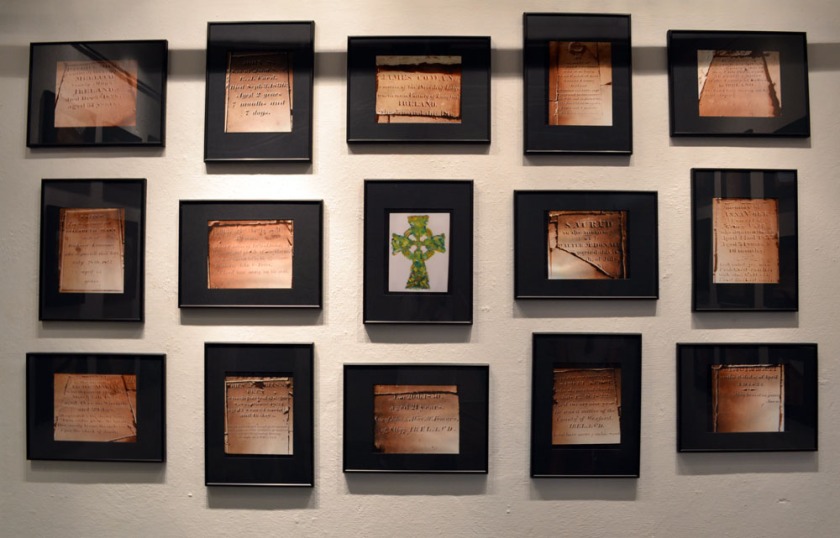 Photographs of the tombstones are on display so that visitors can read them.

Like the Guildhaus, the altar of St. Francis shows no sign of the secrets that lie beneath.

We ended our tour and trip to Over the Rhine as any self-respecting German, or Irishman for that matter, would do, and joined our tour guide John at Lackman’s corner bar for a brew to quench our thirst, cool our throats, and lighten our spirits.

Did I mention John was informative and entertaining?

Thanks, John, for a great tour.