I always imagined the Alamo as a small square structure built out of logs located somewhere in an unpopulated field or prairie in the southwest. Imagine my surprise at finding a relatively substantial stone building situated on a corner among the high-rise office buildings of downtown San Antonio. If I’d paid better attention in my high school history classes I might have known better.

The Alamo entryway structure is a modern addition to the historical park.

The last stand of the Alamo actually occurred in what was originally the chapel of the Mission San Antonio de Valero. This Spanish mission was established in 1718 by a Franciscan missionary to be used as a combination religious and trade school for Indians, as were all Spanish missions. The mission complex once covered as many as four acres of ground and in addition to the chapel held a convent for the priests, a granary, workrooms, storerooms, and Indian housing, all of which was surrounded by a wall.

Now many of the structures have been reconstructed into a large historical park complete with costumed soldiers and pioneers.

The mission was later used as a church for soldiers and between 1806 and 1812 it functioned as San Antonio’s first hospital. It gained the name of  “the Alamo” when a company of calvary was stationed there during the 1800s.

Texans most like to remember the Alamo as the place where the tide turned in the Texan revolution. At that time it was used as the headquarters for the Mexican General Martin Perfecto de Cos who was preparing for a Texan assault in late 1835. This confrontation ended with de Cos’ surrender to the Texan army. 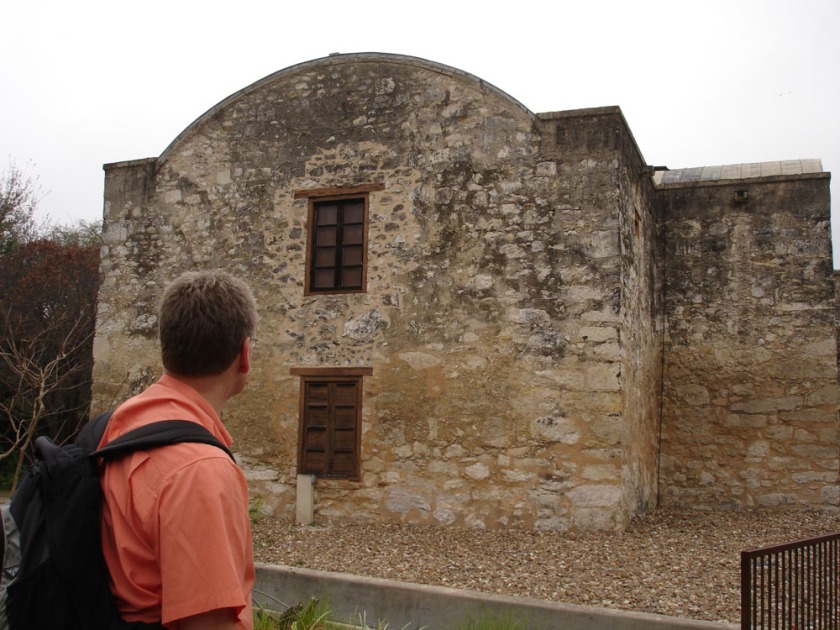 After the surrender, a small group of Texan soldiers held the Alamo, refortifying it, until Mexican General Santa Anna initiated a siege on February 23, 1836. On March 6 the Mexican army climbed over the walls and attacked the Alamo killing all or almost all the defenders who had barricaded themselves in the buildings. The last building to fall was the chapel. When the end wall of the chapel fell (and if I’m not mistaken it’s pictured above) it was the end for the last defenders who had been firing cannonballs from inside.

In this picture you can see modern buildings in the area surrounding the Alamo.

The story of the Alamo is one of the larger-than-life accounts of history I grew up with without ever knowing the full details. It was fascinating to visit there. 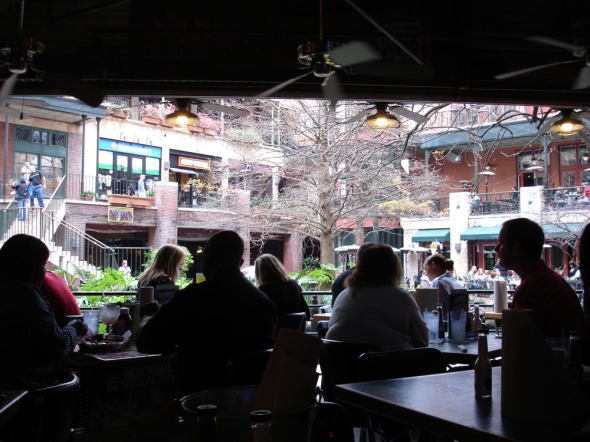 We had taken a bus from our B&B in the King William’s district to the downtown location of the Alamo. Following our tour, we walked down a nearby stairs to enter the River Walk where we had lunch at Joe’s Crabs. 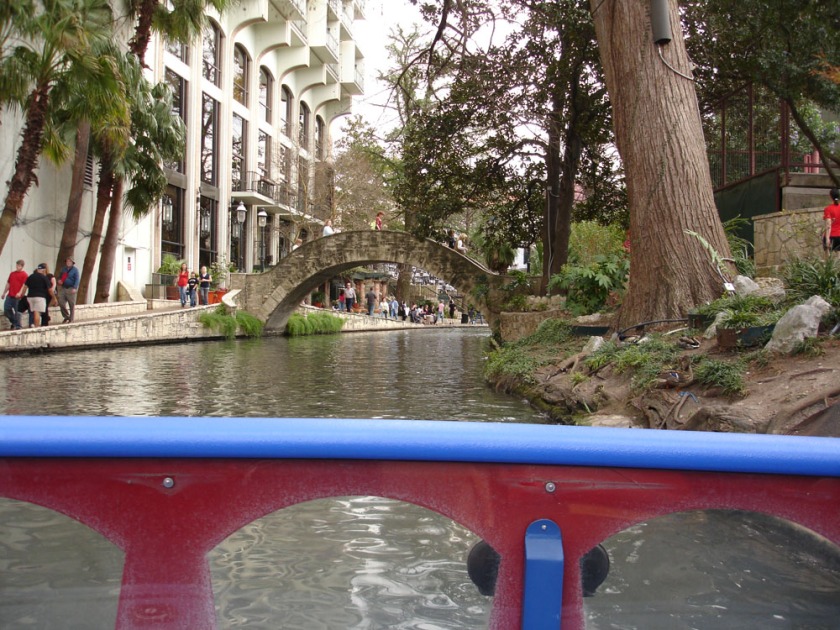 Then we took a ride on a water taxi. 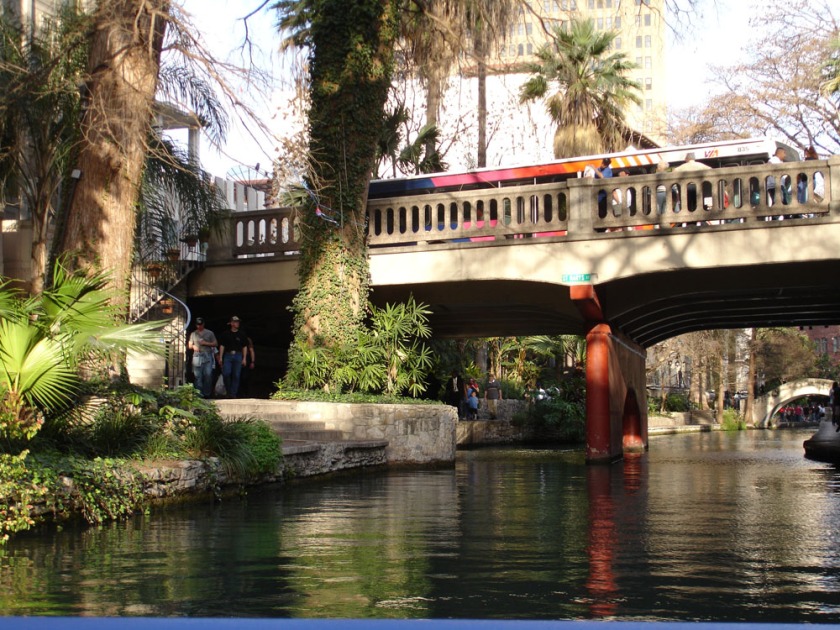 You can see the bus on the city street above. The River Walk is an ideal place to cool off and relax. 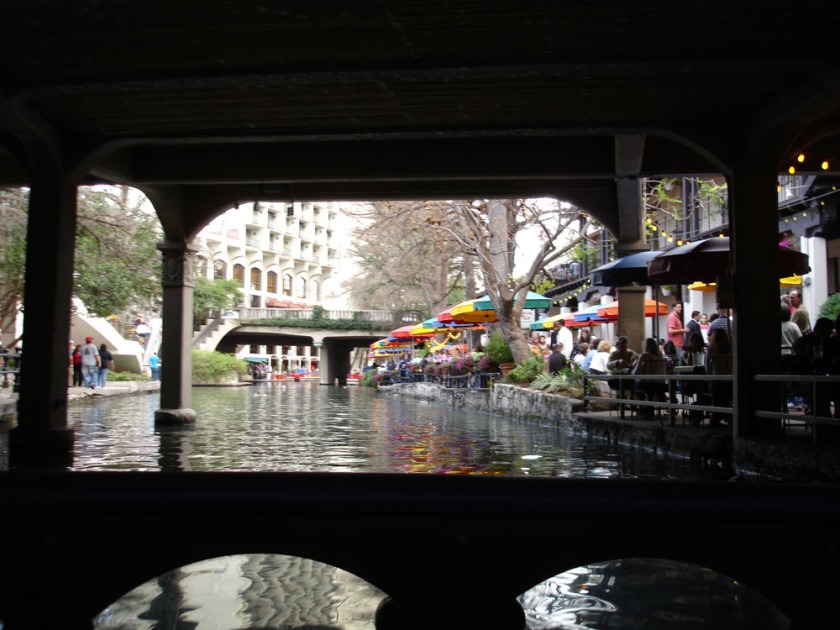 I’d go back here again in a heartbeat. And I’d do it in winter again.

Next up: part 3 of 3 – The Spanish Missions.
Find links to complete series at San Antonio.
Information on the Alamo from http://en.wikipedia.org/wiki/Alamo_Mission_in_San_Antonio 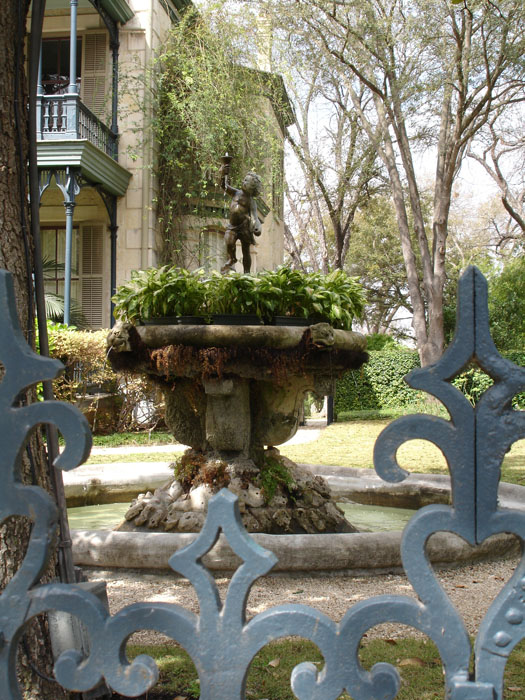 Our first stop in San Antonio was the historic King Williams district with its beautiful stately mansions that make you feel like you cruised up the San Antonio River and stepped off the river boat in the mid-1800s.

The King Williams Historic District is a 25-block area near downtown on the south bank of the San Antonio River. In the late 1800’s it was considered the “most elegant residential area in the city.”

Even the more modest homes carry a quiet dignity settled in among the arching trees and behind stone walls and decorative wrought-iron railings.

We visited San Antonio at the end of February in 2008, four years ago today on February 29th. You can see that some places are beginning to green-up for the spring. We were expecting temperatures in the upper 40s to mid-60s, and packed accordingly.

We were staying in the Oge House in the King Williams’ District. (There should be an accent on the ‘e’ in Oge, but I don’t know how to put it there and don’t want to spend the time figuring it out.) Owned by a pioneer Texas Ranger, cattle rancher and businessman, Louis Oge, this historic mansion was built in 1857. 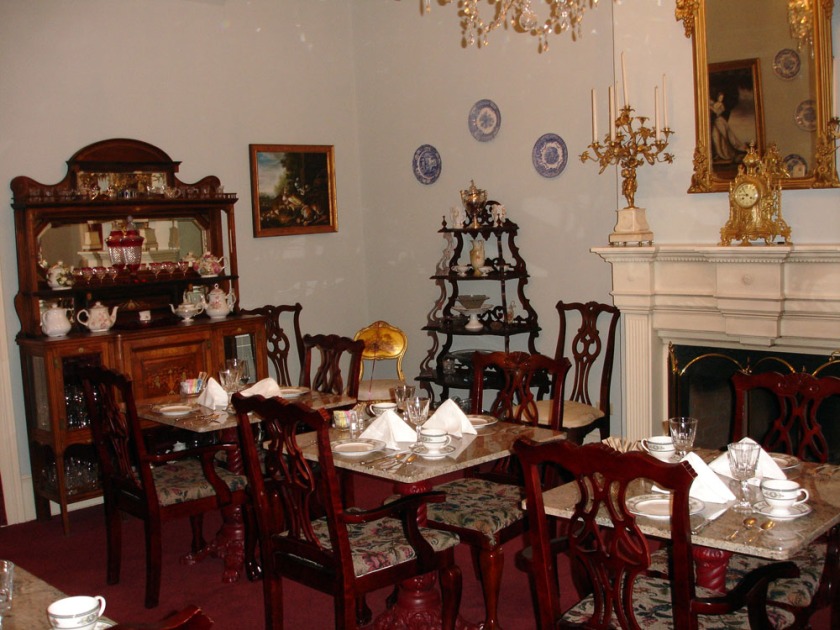 Breakfast was served every morning in the formal dining room.

I imagine once the trees fill out with a shady canopy, this garden behind the Oge House, beside the river, would feel like a little piece of heaven.

My tour director, guide, and husband, decided it would be nice to take a walk along the river to the central area of town on the River Walk, since it was only a short distance away. And I will admit it was a beautiful walk, albeit a bit longer than I had anticipated in my heavy clothes, not particularly walking-friendly shoes, and extra sweater. 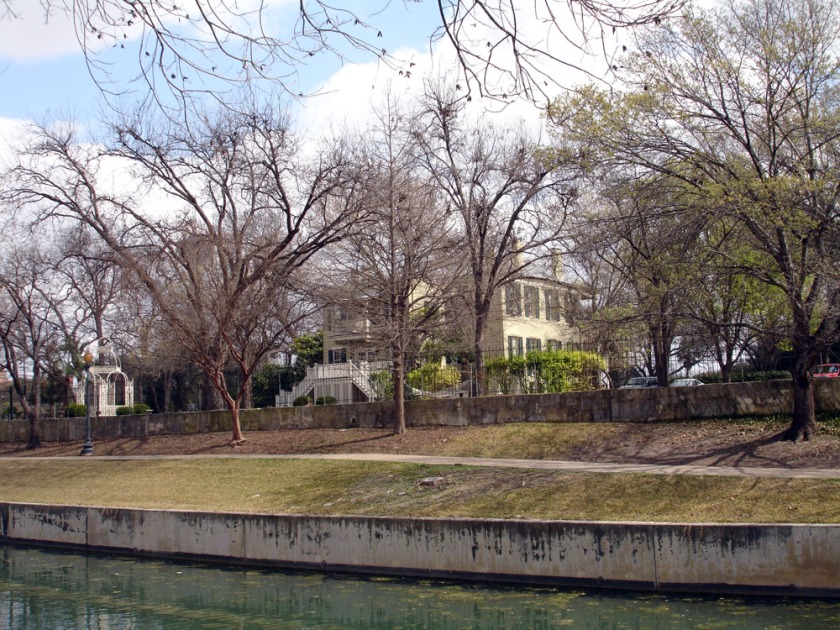 Here’s the view of the Oge House from the River Walk.

We left the stately mansions and beautiful gardens of the King Williams District behind as we got closer to the downtown area where the walls of buildings line the walk. Here you see spare river taxis moored along the walk.

We are about to enter the entertainment district of the River Walk in the downtown area, for which it is most famous. As you can see, Mark has removed his jacket and rolled up his sleeves for the unseasonably warm temperatures San Antonio was experiencing during our stay.

As we stood there, likely discussing where I was going to buy a lighter weight shirt and flip flops for my feet, this fully-loaded touring river taxi cruised by. 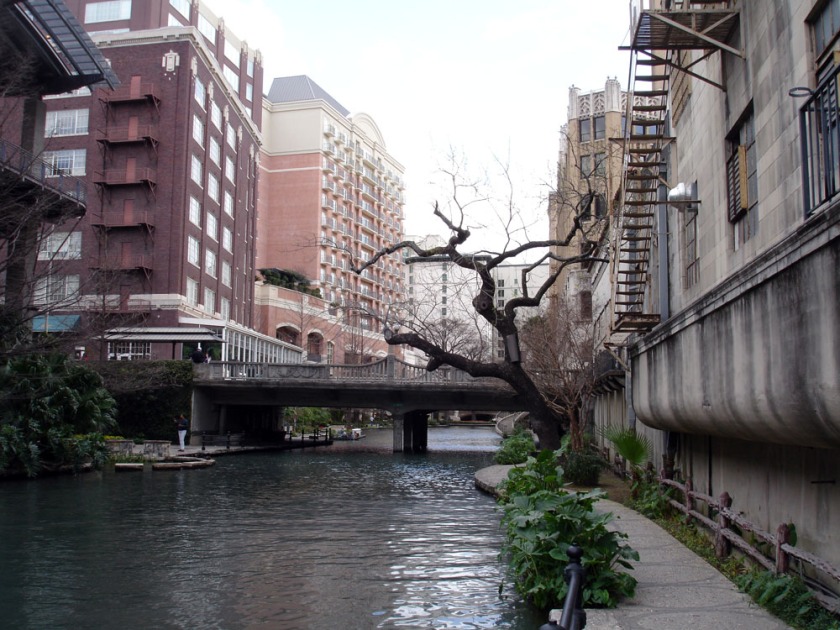 The River Walk is built one story below street level where cars cross over on bridges. This section appears to be mainly hotels or possibly apartments.

Newly dressed in a short-sleeve t-shirt, wearing flip-flops and carrying a bag of shoes and discarded clothes, I was ready to explore the cafes, restaurants, and shops of this entertainment district with it’s lush landscaping that included waterfalls and charming pools. 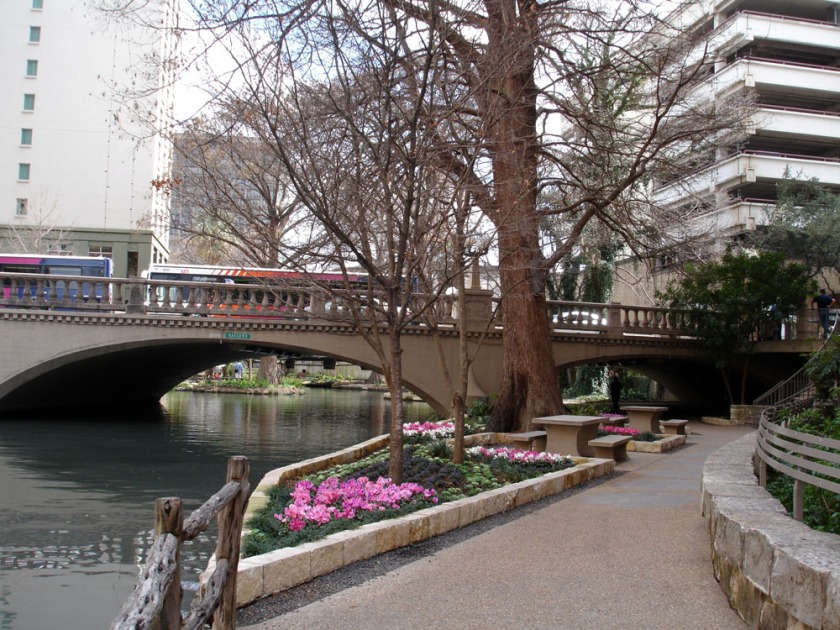 The best part of the River Walk is that this beautiful area of rest and refreshment is a short flight of stairs from the downtown area above, which we took full advantage of on our second day in San Antonio, when we visited the Alamo.

Information on the King Williams’ District, the Oge House, and the Riverwalk comes from the following sites you might like to visit: http://www.visitsanantonio.com and http://www.ogeinn.com/