Although we were walking beside fascinating geological features and cliffs that rose as walls around us on our way to Old Man’s Cave in Hocking Hills State Park, I often found myself gazing at Roots.

Over the years park authorities have incorporated human-man structures to assist the population in experiencing the wonder of the park’s features. This bridge is actually a series of free-standing, unconnected concrete steps with small gaps in between. It reminded me of Robert Jordan’s concept of “the ways” in the Wheel of Time series where characters got on and traveled through the dark without clear guidance or expectation of destination. A lot of bad stuff could happen in the ways, especially if you encountered traveling trollocs. I’m just glad we were traveling here in the light of day.

We took the low road. It’s a long way up to the rim trail.

It’s difficult to convey the immensity of the surrounding landscape. I was Enchanted with the green mossy growth on the walls. 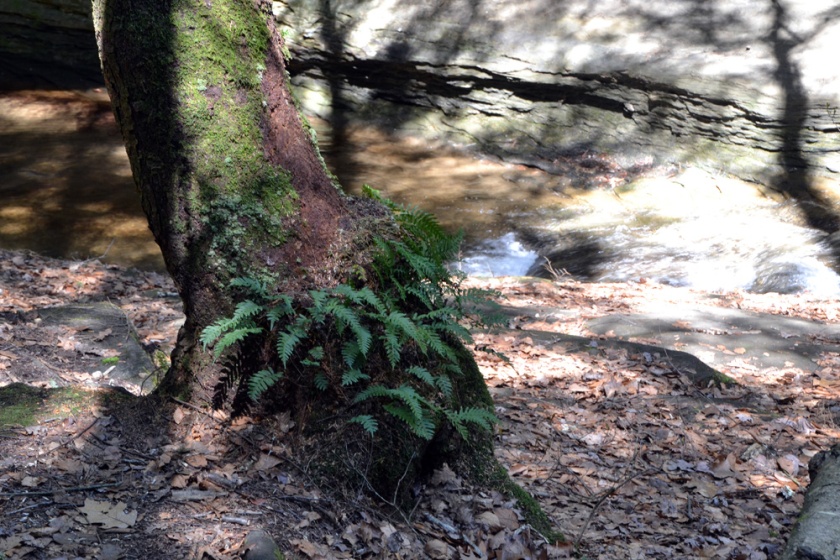 The ferns growing out of the base of a tree looked like someplace you might find magical forest dwellers living.

And of course, the Water Runs Through It. Largely because these geological features were created by water dissolving way the more soluble minerals leaving behind the hard structures, like in Ash Cave. 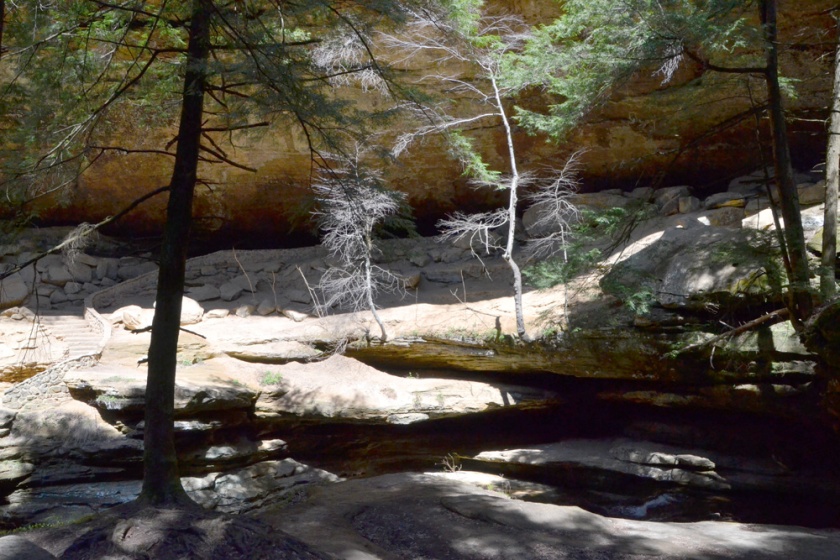 The cave itself does not look overly impressive from a distance. It appears as a dark horizontal crevice in the face of the cliff.

Another human-made structure helped us get to The Main Event.

Some people think that this profile of a face in the rock is the Old Man. Not so. The old man was a recluse named Richard Row who made this cave his home in the 1800s. The face in the rock looks like something out of the time of Cleopatra to me. Do you see it?

It was fun to watch fearless Arthur boldly go . . .

and even cross A Bridge Too Far. Nothing seemed to deter the little guy out there. He was, however, afraid to jump off the bed at the cabin. It was a wee bit too high for his liking.

Inside Old Man’s Cave Richard Row clearly had A Room with a View.

The green mossy rocks transform the landscape into a Paradise Lost.

Without a doubt this cave was big enough for a whole clan and their cavebears.

Tomorrow I’ll show you the brick house, or was that the rock house?

Why does it rain? The simple answer.  More.