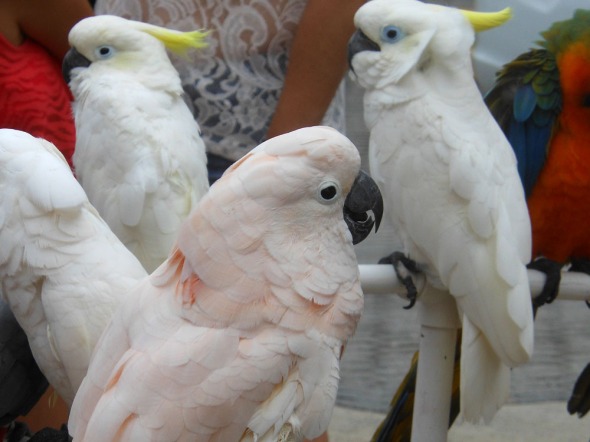 When we planned our trip to Puerto Rico, I had visions of seeing colorful exotic tropical birds there. 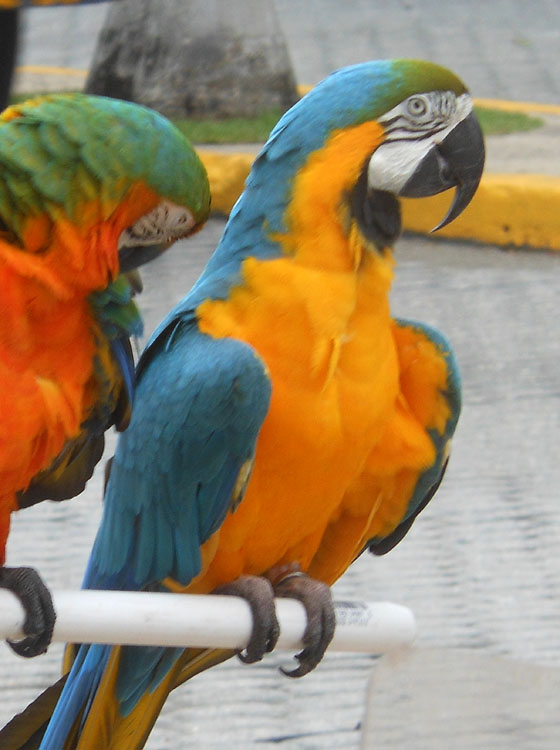 Imagine my thrill when we got off the boat in Old San Juan and we were greeted by these little guys. 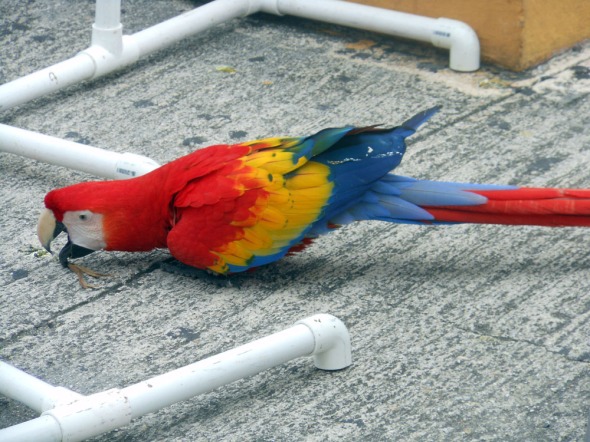 These birds were friendly. One wanted to share the little bag of pretzels I was eating. 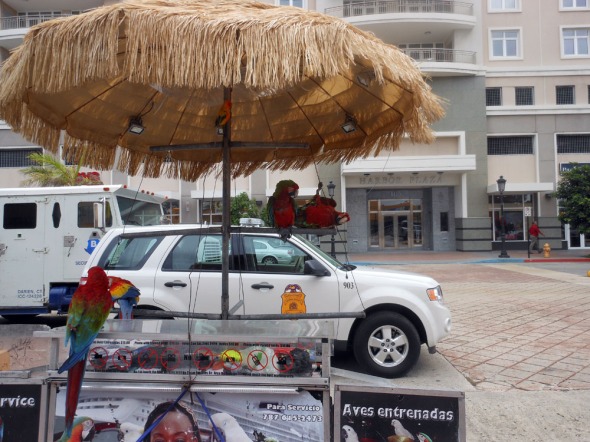 I suspect most, if not all, of them were not even native to Puerto Rico. These colorful exotic tropical birds were actually trained performers. Their job was to sit on someone’s hand while their owner snapped a photograph and sold it as a souvenier for $10. And what I eventually realized, after I had already taken about 4 or 5 photos, was that he had signs all over his cart informing the public that no photography was allowed. Of course, I’m not sure that would hold up in court, as he was on a public street. I respected his written request and stopped photographing the birds, but I did not delete the photos from my memory card. 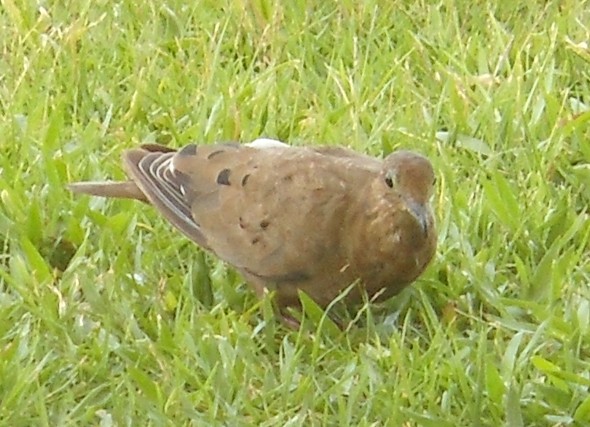 Mostly we saw less colorful birds that looked familiar like this dove. I think this may be a Zenaida dove, but don’t hold me to it. A relative of the mourning dove, the Zenaida dove is common in Puerto Rico and the Virgin Islands. 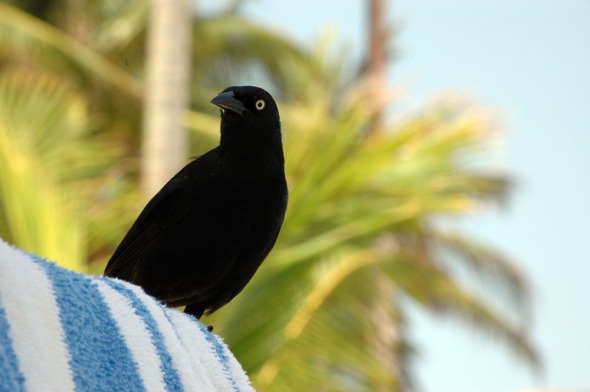 Or this bird that looks something like a crow, but I think was the Greater Antillean Grackle. 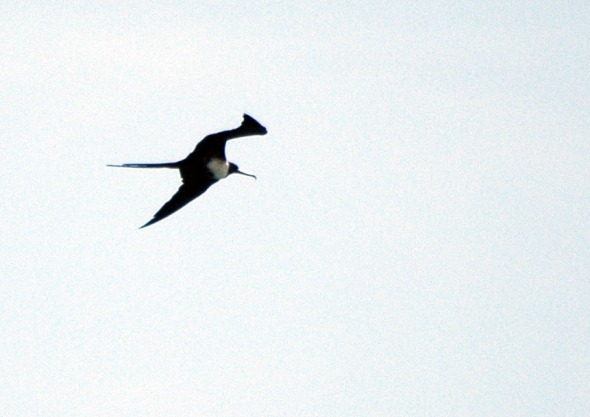 I did catch a picture of this interesting bird that I think is the Magnificent Frigatebird. What I first noticed about it, but wasn’t able to capture on film, was that it’s tail separated into a “V” shape. It was a very distinctive thing to see. 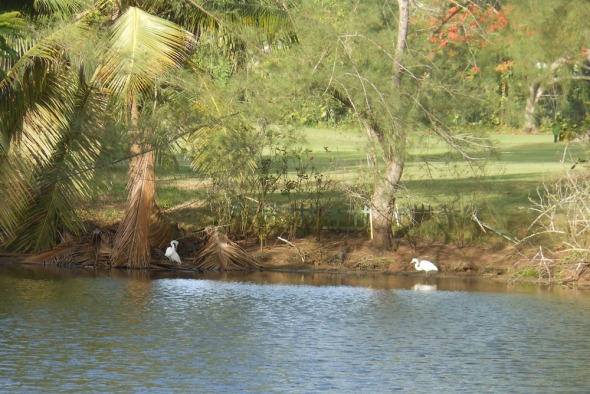 I also saw a couple of these Great Egrets (I think) from a distance—always a thrill for me. 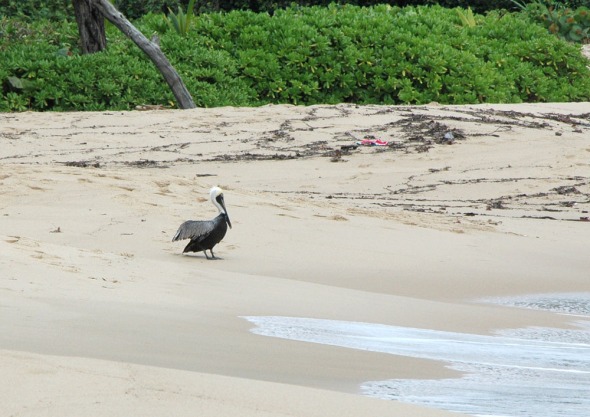 I took a lot of pictures of the pelicans. 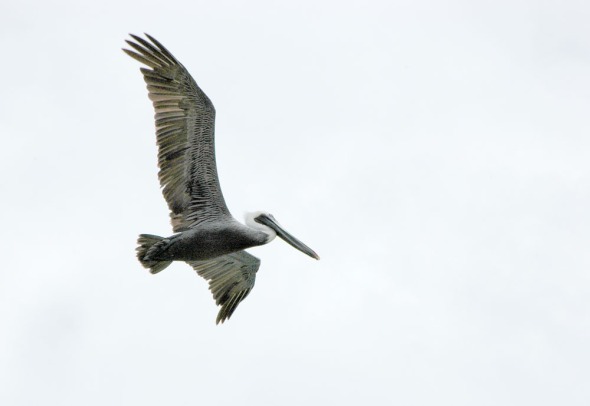 We were on their flight path 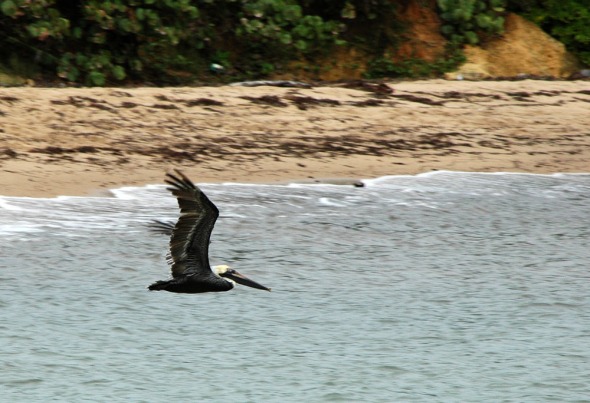 as they headed for fishing grounds in the curve of our little bay. 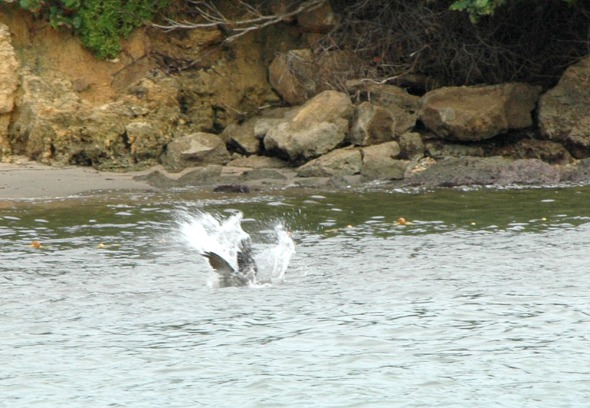 We watched their dance —  a dive ending in a big splash, 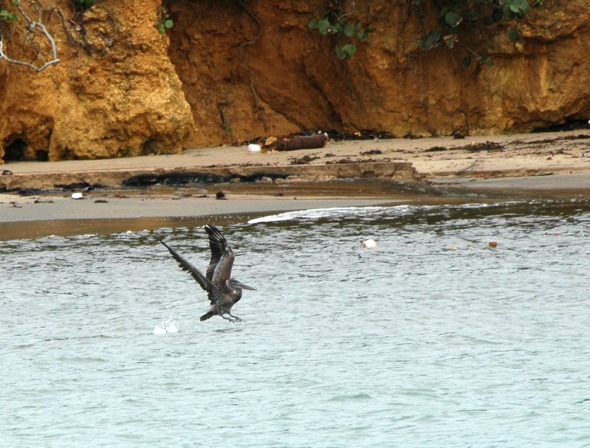 taking to flight from the water, 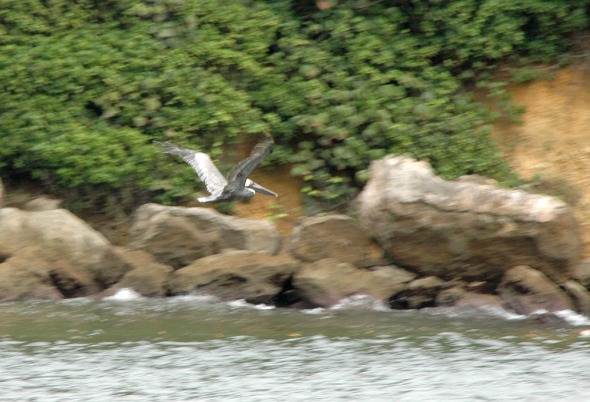 and flying back around in a circle to position themselves to dive again. 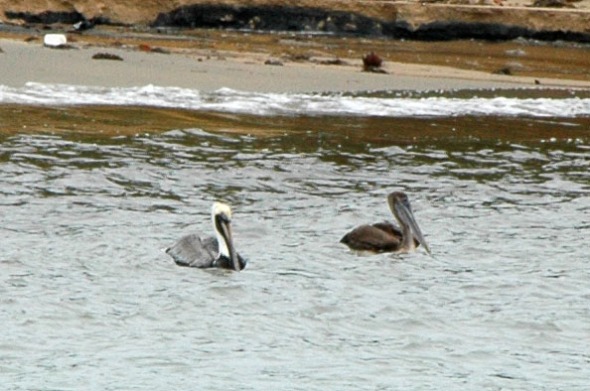 Sometimes they fished as a pair, 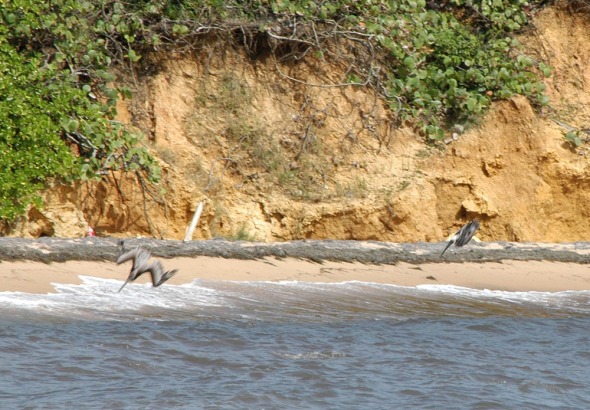 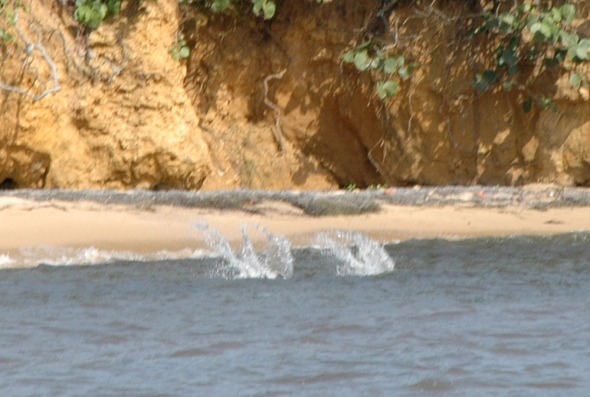 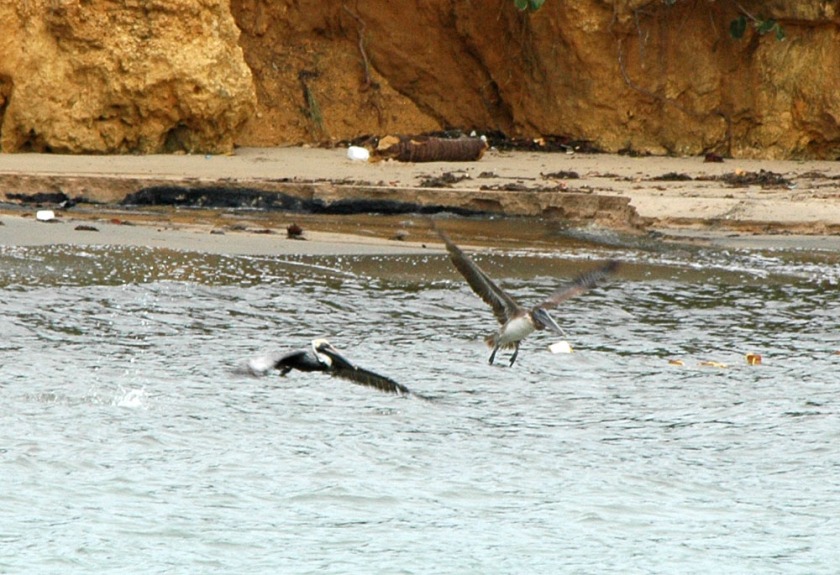 taking off together again, 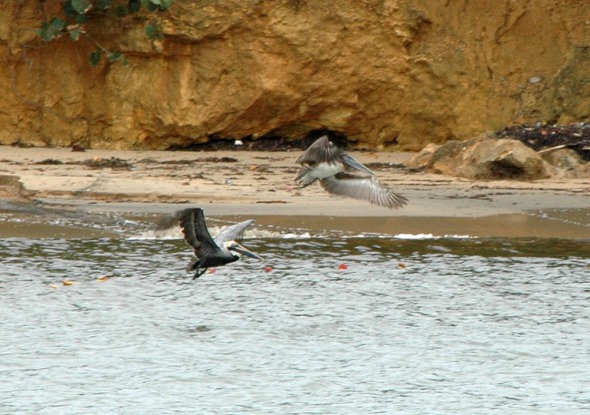 a synchronized ballet performed by two. 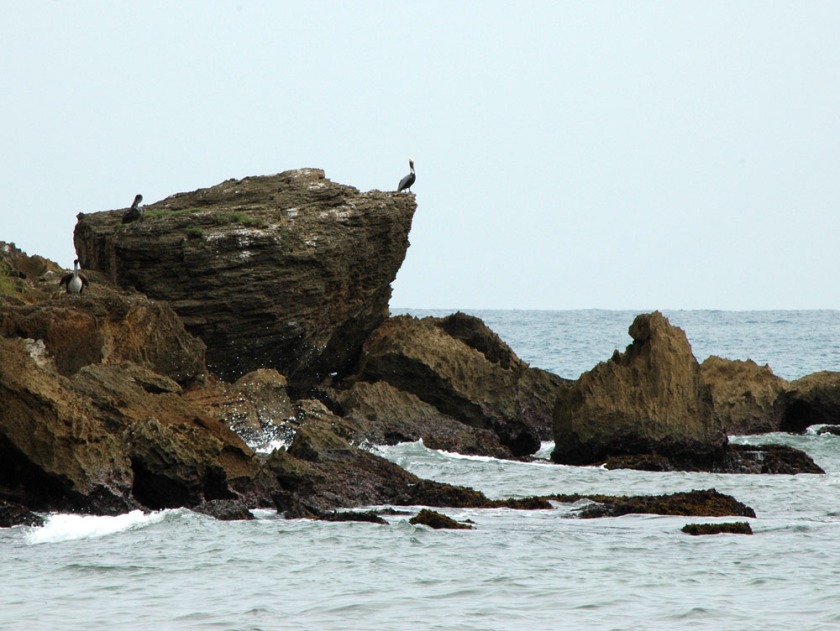 I sat on the beach listening to the crash, splash, and ebb of white foamy surf, a fine cool mist on my skin.

Beside me, Mark  stretched the length of the chair, the sun shining off his skin where he sat  near my umbrella’s oasis of shade.

Laughter rose from children down the beach

The wind played with my hat, moving my hair softly against my face, and ruffling the towel at my back.

and watched the pelicans

guarding the bay from their lookout point,

or resting against the dark green and gold rocky backdrop.

And I attempted to capture the dance of the pelicans

and take it home with me. 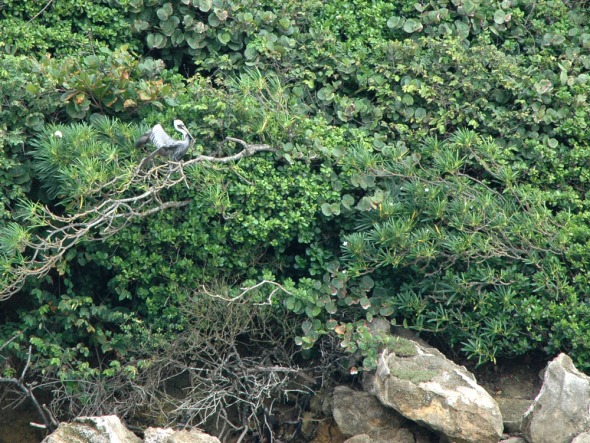 14 thoughts on “Birds of Puerto Rico”